It s the dream of every cricketer to be selected for his country. To represent the country in the World Cup is a very special honour.

It s the dream of every cricketer to be selected for his country. To represent the country in the World Cup is a very special honour. But imagine getting selected but going through the tournament without playing a single match. The name of Sunil Valson in the 1983 World Cup readily comes to mind. But there are several players like him.

H Natarajan picks a team of XI Indian players who never got a chance to play in the World Cup three of whom were in the 2015 World Cup. Of course, there is every chance that they could go on to play a World Cup somewhere down the line.

He was cooling his heels in the pavilion during the 2003 World Cup as Rahul Dravid was asked to keep wickets to give the side of including another bowler or batsman. One had three wicketkeepers to select: Dinesh Karthik, Bharath Reddy and Patel. Patel and Karthik both get into the side as more accomplished batsmen, with the former as the first choice keeper.

Patel s opening partner will be Dinesh Karthik, who too went through watching an entire World Cup from the sidelines than from the middle. Both Patel and Karthik have kept wickets for India and both have opened the innings as well. Karthik, who is the captain of this team, makes an ideal right-left combination with Patel.

The inaugural edition of the World Cup had limited matches and thus limited opportunities for the players. Sharma was a good all-rounder in First-Class cricket who scored 8614 runs with 18 hundreds and took 191 wickets, with a best of six for 26. But his international appearances were limited: five Tests, two ODIs and not a single World Cup. But he will come in at one-drop in this line-up and can also chip in as a bowler, should the captain need a sixth option.

His career may have panned out differently had he be born in a later era where his utility a batsman, a useful bowler (he has a First-Class best of seven for 20), and brilliant fielding would have been a major draw. Like Sharma in 1975, Yajurvindra went through the 1979 World Cup without getting a game. In fact, he ended his career without ever playing a single ODI. But in this team, he will bat at No 4.

One of the three Indian players who were reduced to the status of privileged tourists during India s campaign in the 2015 World Cup. Rayudu, who has played 27 ODIs, will be the No 5 batsman in this side. He can also keep wickets, but that would not be needed in a side which has a plethora of riches to man this specialist position.

A left-hander who played 12 ODIs for India, Khurasiya could not break into Indian XI during the 1999 World Cup. But Khurasiya can hardly blame anyone as he batted on 11 occasions in the 12 ODIs he played and scored just one half-century (57) with an average of 13.54. But he will get to bat a No 6 in this line-up.

He is presently the batting coach of the Indian team, but back in 2003 he was Parthiv Patel s constant companion in the sidelines. Bangar did not get to play a single match, but as someone who did reasonably well in the limited opportunities he got, he will open the bowling. Bangar, of course, is a utility player as he can bowl medium-pace as well.

If one were to pick a World XI of players who were picked in the World Cup squad but never played a single match in the quadrennial showpiece, then Irfan Pathan will be a very strong contender for a spot. Here is a man who could score a hundred with his bat or take five-for with the ball. He can bat up the order or give the ball a hard tonk. Pathan has played 120 ODIs, yet he went through a career which did not have a single World Cup appearance. He will bat at No 8, but can move up the order if need be. He is the floater in the line-up.

Another 2015 World Cup member who was reduced to a tourist. Binny is very handy with the bat for someone coming in at No 9. As ODI bowler, he has a best of six for four. He is one of the four fast bowlers in the side.

With Ravindra Jadeja not in the best of form, Axar Patel was unlucky not to play in the 2015 World Cup. The left-armer is the solitary specialist spinner in the side.

He is eternally remembered as the only player in that 1983 World Cup winning Indian team who did not get a single game to play. A fine left-arm fast bowler from Delhi, Valson took 212 wickets with a best of eight for 40. Sadly, he never played for India Tests or ODIs. He is the opening bowler of this side.

Valson, Pathan, Binny and Bangar form the three fast bowlers of the side, with Axar Patel the solitary specialist spinner. 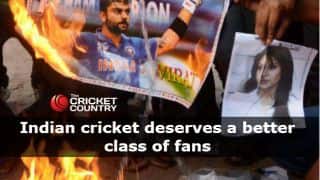 Does the Indian cricket team deserve a better class of fans?