The combination of two veteran stars guaranteed the MS Dhoni led side qualify for the final against Mumbai Indians, which will be played at Kolkata on May 24. The Indian Premier League (IPL) has provided a platform for the young cricketers from India and overseas since its beginning in 2008. IPL being a Twenty20 (T20) contest is considered to be the game of young guns but on Friday, two veterans came in rescue of the Chennai Super Kings (CSK) side, as they beat Royal Challengers Bangalore (RCB) in the second qualifier.

Ashish Nehra, 36, whose entire cricketing career has seen a lot of ups and downs, has been the pivotal reason for CSK’s success this season. On Friday, another good performance from him saw him win the man-of-the-match award in the decisive second qualifier at Ranchi.

CSK restricted RCB to 139, but the job was half done. Mike Hussey, who is almost 40, and spend the major part of the tournament in the benches, rose to the occasion and guided CSK to victory with his match winning performance of 56 runs from 46 balls.

It was a difficult task to name the man-of-the-match for this game but the jury rewarded it to the bowler for his fine spell. Nehra, who believes that Hussey’s contribution was equally important, choose to share the award with him. The above image was shared by the Broken Cricket Twitter account.

” I will Share this Man of the Match with Mike Hussy ” ~ Ashish Nehra Age is Just a Number!! pic.twitter.com/3UTWwvTe3e

The combination of two veteran stars guaranteed the MS Dhoni led side qualify for the final against Mumbai Indians, which will be played at Kolkata on May 24. 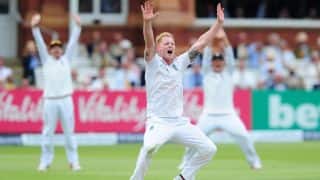