Mohammad Azharuddin is one of India’s most celebrated batsmen and captain, whose career tragically ended in 2000 after the match-fixing scandal.

Mohammad Azharuddin is one of India’s most celebrated batsmen and captain, whose career tragically ended in 2000 after the match-fixing scandal. Stylish, inspiring and controversial, Hyderabadi superstar enjoys a massive fan following and his life is now set to be captured in the reel.

On May 20, Balaji Motion Pictures released the first look of the film and on Sunday, the day of the Indian Premier League (IPL) final, the film’s team released its teaser. Actor Emraan Hashmi stars as Azharuddin in the film, which will hit the screens on May 13, 2016.

The biopic will cover the former Indian captain’s journey as a cricketer, his personal life and also focus on the infamous match-fixing controversy which saw him miss the landmark of playing 100 Tests for India. Prachi Desai, who worked with Emraan in Milan Luthria’s Once Upon A Time in Mumbaai, is set to essay the role of Azharuddin’s first wife. It is not clear who will play the role of Sangeeta Bijlani, the cricketer’s second wife but names of Nargis Fakhri and Kareena Kapoor have been mentioned in the past.

The film will be directed by Anthony D’Souza, whose last film was the Akshay Kumar-starrer Boss. Emraan is seen in the teaser, donning the Indian blue and walking out to bat to bat. Emraan, collared up, just like Azhar, seems to do justice to the walk. The actor also tweeted about the teaser: 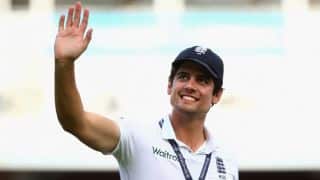 Alastair Cook relaxed as England look for its new coach