Infamous for being highly defensive as both batsman and captain, Lawry was nonetheless one of Australia's finest opening batsmen.

1. Phantom: As a young lad, Lawry was an avid lover of the comic book strip featuring The Phantom. As a result his teammates at Victoria christened him Phantom. Ironically, another name for the Phantom in the comics is ‘The Ghost Who Walks’; in later years Lawry would come to be known as The Corpse with Pads On.

2. The short-lived dasher: Lawry was a rather dashing opener in his early days, and was even compared with Don Bradman for his hooking, and by no less a man than Denis Compton. However, by the end of his career no one would have imagined Lawry to ever be anything but a dour batsman.

3. The Corpse: Lawry’s batting turned so ultra-defensive with time that English journalist Ian Woolridge once called him “a corpse with pads on.”

4. Punched: Abhishek Mukherjee relates an incident of how Jack Fingleton and Neville Cardus were once riding in a taxi in England during an Ashes Test. The taxi had to stop in a crowd, and a pedestrian tapped the taxi with his umbrella. The driver jumped out and punched the pedestrian, who was none other than Lawry. When asked about his extreme reaction, the driver said, “I’ve been watching that Lawry bat all day at The Oval. I’m in no mood to put up with any more bloody nonsense.”

5. Carrying the bat: Lawry carried his bat twice, remaining not out while opening batting as the rest of the team were bowled out. The first time was in the third Test against India at Delhi in 1969-70, when Lawry made a second-innings 49 not out in a team score of 107. India chased down the total by seven wickets. The second time was in the fourth Ashes Test of 1970-71 at the SCG. Set 416 to win, Australia were bowled out for 116 with Lawry unbeaten on 60.

6. Opener par excellence: Lawry is No. 20 in the list of best opening batsmen of all time in terms of batting average (with a 1,000-run cut-off), and No. 22 on the list of most runs scored as opener. Bear in mind there have been over 900 opening batsmen in Test cricket history.

7. The unpleasant sacking: Despite Lawry’s enviable record, he was dumped midway through the 1971 Ashes. After constant run-ins with the Australian board and tactics that were deemed too defensive (Lawry was captain at the time) he was sacked as captain and even dropped from the team by the selectors. However, what was most distasteful was that he was not informed of this in person. It was only when a journalist confronted him about it that Lawry found out.

Despite this, he remained graceful. He later said, “I’ve no anger at all about being dropped. I hadn’t been playing well that series, and I had no compassion when I was dropping players as a selector. I was disappointed that I’d been with the selectors in the dressing-room most of the previous day.”

8. Commentator: After his playing career, Lawry became a cricket commentator. His excitement, enthusiasm, and energy behind the microphone is in dire contrast with his strait-laced, dour batting. Mukherjee says it best: “The volatile tone and the characteristic ‘got him!,’ ‘clean as a whistle,’ and ‘it’s all happening!’ – made him build up an image that was a complete antithesis of his batting and captaincy.”

9. First-ever skipper: In what proved to be the first ODI of all time, Australia beat England by 5 wickets under the captaincy of Lawry. It was the only ODI he ever played.

10. Wisden honour: In 1962, after only his first international tour, Lawry was named a Wisden Cricketer of the Year.

Photo: Virat Kohli spends "a beautiful day with the most beautiful woman in the world" 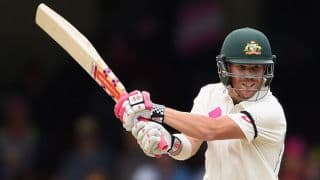