Considered as the most accomplished and complete wicketkeeper by many, Bob Taylor ended his career with most dismissals in First-Class cricket.

Born July 17, 1941, Robert William Bob Taylor is a former England wicketkeeper and one of the all-time best in the art. His opportunities at the highest level came late, especially because of the presence of Alan Knott in the English side during his playing days, Taylor made most of the chances he got after turning 36. Considered as the most accomplished and complete wicketkeeper by many, he ended his career with most dismissals in First-Class cricket. On his birth anniversary, Chinmay Jawalekar looks at 15 facts from the life of the cricketer, who could have achieved a lot more at international level if only he was born in some other era.

1. Birth and early life: Taylor was born in Stoke-on-Trent. As a schoolboy, he developed keen interest in wicketkeeping and kept wickets on the cinder car park adjoining Stoke City FC’s ground near his home. A child prodigy, Taylor was in the school Under-15s at the age of 12. By the time he turned 15, he was playing for Bignall End in the North Staffs and South Cheshire League and he stated playing for Staffordshire in the minor Counties before he was 16.

2. Interesting incident on debut: When Taylor arrived for his debut against Shropshire, the gateman did not allow the youngster into the ground despite the cricket bag. It was only after a player vouched for him that he was let inside the ground. Those days, Taylor played in black shoes, gray trousers, and pads that came up to his chest. During another game, he was asked by the groundsman: “Have you got a box on, lad?” Taylor had to admit he had not; in reality, he did not even know what a “box” was!

3. Early criticism: A trendsetter of sorts, Taylor would stand up to the bowlers, even the quicker ones, in early days. And even though he did a commendable job behind the stumps, he was generally criticised by experts and the bowlers for standing up to the stumps and missing the occasional edges. They all had never seen anything like this.

4. Injury and focus towards fitness: In 1964, Taylor suffered from a knee injury and had to miss out on seven First-Class games. He even lied about his injury at that point of time. He told Derbyshire CCC that he had slipped on an escalator while it actually occurred when he was playing football. While he was out of the side, his County gave parting ways with him for good a brief thought. His replacement Laurie Johnson had done well, especially with the bat, but a determined Taylor made a comeback. The experience taught him to pay attention to physical fitness.

5. Test debut at 30: Taylor made his Test debut at the age of 30 against New Zealand. But it was restricted to a solitary appearance, as England s first-choice keeper Knott was back for the second Test. Thereafter, Taylor kept travelling with the side but never got to play. He remained Knott s understudy till World Series Cricket changed things.

7. World Series Cricket and comeback: At 36, Taylor probably did not think of a Test return. But Kerry Packer came to his rescue as former England captain Tony Greig convinced Knott to join World Series Cricket, thus opening the doors for Taylor s comeback. He did not look back from here and went on to play for seven more years, adding 56 more Test caps.

8. Record-man: Taylor holds quite a few First-Class records. His 1,649 First-Class victims remain a world record. In addition, his 1,220 victims (1,085 catches and 135 stumpings) also make him top the County Championship charts. He also holds all major records for Derbyshire, as he is the only one to scalp 7 victims in an innings for them (he has done it twice), besides holding the record for most victims in a match (10); and is the only one to have gone past the 80-victim mark for them in a season thrice (in 1962, 1963, and 1965). His tally of 60 victims off Ian Botham s bowling is still an England record for most dismissals by a bowler-wicketkeeper pair. Taylor also shares Wasim Bari s world record of taking 7 catches in the innings. The feat has subsequently been levelled by Ian Smith and Ridley Jacobs, but not beaten.

9. Apologies from Botham: Taylor also shares an interesting incident with Botham. In 1978 during a Test, Taylor and Botham were involved in a 160-run sixth-wicket stand. It ended when Botham ran him out trying to steal a quick single to get to his hundred. However, Botham apologised to Taylor, something which he did not do when he ran Geoffrey Boycott out deliberately in the second innings of the same match.

10. When Taylor walked: Once in the fifth Test of the 1978-79 Ashes at Adelaide, when he was approaching his maiden First-Class century, Taylor did something which befits a gentleman. He had a faint edge down the leg side and even before the umpire could react, he simply walked. He was well aware of the fact that he was batting on 97 and it could have been his maiden First-Class century. But his ethics meant more to him than his achievement.

11. The favour returned: Taylor got his favour returned in the Jubilee Test against India in 1980. Batting first, India scored 242 and reduced England to 58 for 5. This was when Taylor joined Botham and began the rescue work. When the team score read 141, he was declared caught by the umpire. Taylor was not convinced and protested, as a result of which, Indian captain Gundappa Viswanath recalled him in the act of genuine sportsmanship. As things happened, Taylor and Botham added 88 more runs and helped England take a vital lead. India were bowled out for 149 in the second innings and went on to lose the Test by 10 wickets.

12. The tale of four wicketkeepers: Taylor has been a part of the only Test where a side used four wicketkeepers. After his retirement in 1986, when New Zealand were touring England, he was called in to keep wickets after the keeper Bruce French suffered a head injury and subsequent concussions. He was called after Mike Gatting took special permission to do so and once he arrived, a relieved Gatting said, thank goodness you ve come . However, till he arrived, Bill Athey kept wickets, thus becoming third player to keep wickets in the match. Hampshire s Bobby Parks became the fourth and the final keeper to keep wickets in the match.

13. Chat: A friendly and amiable personality, Taylor was Nicknamed Chat due to his ability to be involved in amicable and patient conversations in the England and Derbyshire dressing-rooms. He would get into long chats with people he met for the first time and even with people he knew he would never meet again.

14. Accolades: Taylor is widely regarded as one of the best and most complete wicketkeepers in the history of the game. Wisden noted while acknowledging his achievements in 1976-77 as the Cricketer of the Year by writing, “artistry there is no other word for it behind the stumps has long illumined even the darkest hours of Derbyshire cricket.” He was known both for his acrobatic fielding behind the stumps and his fitness. If only he were to be born in some other era, he would not have to face competition from Knott and have played more for England.

15. Quote: After receiving the Wisden award in 1977 at the age of 36 and almost giving up on the hopes of making an England comeback, Taylor famously stated: There are about 300 county cricketers and we can’t all play for England. Cricket has taken me to many places I would not otherwise have seen and I’m grateful for that. I am a pro and try to behave like one, but I will admit that I don’t enjoy people coming up to me on tour and asking who I am. That’s when it really hurts. This statement showed both his gratitude and resentment. 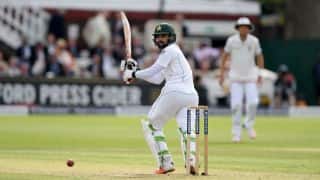 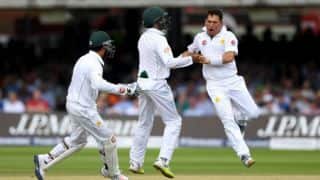 Yasir Shah's 2-for inches Pakistan nearer to victory against England at Tea on Day 4, 1st Test at Lord's