It has been a tremendous year for Pandyas. First, Hardik Pandya broke into the Indian side with explosive domestic performances. During the IPL auctions , Hardik’s elder brother Krunal grabbed headlines when he grabbed INR 2 crore contract from Mumbai Indians (MI).

It has been a tremendous year for Pandyas. First, Hardik Pandya broke into India’s Twenty20 (T20) side on basis of explosive domestic performances. He played a good role in India’s good T20 season before losing his form in the ongoing IPL. During the IPL auctions earlier this year, Hardik’s elder brother Krunal grabbed headlines when he fetched INR 2 crore contract from Mumbai Indians (MI).

It meant his IPL salary was now 20 times more than his younger brother, who played India but more importantly it also meant that both the brothers would play for the same franchise.

Since then we witnessed the phenomenal rise of Krunal. He did no harm to his expensive price tag. The Baroda youngster has scored 233 runs at 46.60 at a strike rate of 192.56 along with bagging six wickets at an economy rate of just over seven. READ MORE: A unique feat for the Pandya brothers

Krunal’s hurricane 86 from 38-balls helped MI win against Delhi Daredevils (DD) on Sunday. An elated Hardik celebrated the win with his brother in the beachside at the picturesque Visakhapatam. He posted the above picture on Instagram and wrote, “You beauty, what a proud moment for me too see you like this. Really blessed truly unbelievable innings you played. God bless you always You always achieve more heights. #brothersfromthesamemother (sic).” 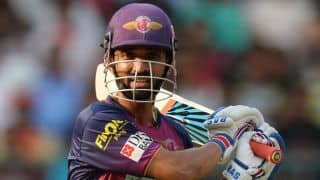