Griffith was picked to play the Commonwealth XI at Pakistan in 1963.

Charlie Griffith, born on December 14, 1938, was one of the most feared fast bowlers from West Indies in the 1960s. He represented West Indies in 28 Tests and took 94 wickets at an average of 28.54. However, he is remembered for hitting Nari Contractor on the head with a rising delivery in 1962. Nishad Pai Vaidya picks 10 facts you should know about Griffith.

Wisden notes that Griffith started off as a wicketkeeper-batsman in school cricket. When he joined Crickland Cricket Club at the age of 15, he took to bowling and his first foray into that was with off-spin. The Almanac further notes that he became a fast bowler with his club, Lancashire (not to be confused with the one in England) did not have one and he took seven for one in his maiden outing.

2. Debut against the Marylebone Cricket Club

In late 1959, Griffith was included in the Barbados side to take on the touring Englishmen i.e. the Marylebone Cricket Club (MCC). Griffith was now a part of the Barbados side that featured the likes of Conrad Hunte, Garry Sobers, Seymore Nurse and Everton Weekes. In his first innings with the ball, Griffith took four for 64, dismissing quality batsmen such as Colin Cowdrey, Peter May, Ken Barrington and Mike Smith. In the second innings he took two more wickets, which included Smith again and Ted Dexter.

3. Test debut after only one First-Class match

Following his performance in the game against the MCC, Griffith was ushered into the West Indies team to take on England. He made his Test debut against England in March 1960 and managed to take only one wicket, that of Geoff Pullar. Griffith had to wait for his next Test for more than three years.

In 1962, Griffith had felled Nari Contractor with a shortish ball during a tour game between India and Barbados. Going into the game, there was a lot of talk about Griffith and his pace. Contractor had opened the batting and he misjudged a delivery and tried to duck and was hit on the head. He was operated upon a few hours later and Griffith also visited hospital. Contractor remained unconscious for six days and could never represent India again. Griffith was also moved by the incident.

Through his career, Griffith had his share of chucking allegations. In fact, during that tour game against India, where Contractor was hit, he was no-balled during the second Indian innings. In 1966, he was no-balled again when West Indies played Lancashire. During that India-Barbados match, Rusi Surti, who was batting with Contractor, was convinced that Griffith was throwing. Even when Australia had toured West Indies once, they had complained against his action.

On the tour to England in 1963, he took 119 wickets in only 20 matches at a brilliant average of 12.83. He was not actually supposed to play the Tests as Lester King was the preferred option. However, Griffith walked in and delivered a brilliant performance.

7. Playing for the Commonwealth XI and scoring 98

Griffith was picked to play the Commonwealth XI at Pakistan in 1963. In one of the matches against Pakistan, he scored 98 batting at No 9. This remains his best First-Class score.

8. Playing for the Indian Board President’s XI

Former West Indies fast bowler Kenny Benjamin’s middle names are Charlie Griffith. Benjamin wasn’t from Barbados but from Antigua. However, he did make his Test debut at Griffith’s homeground in 1992.

Phil Hughes's family thanks supporters in Australia through newspapers 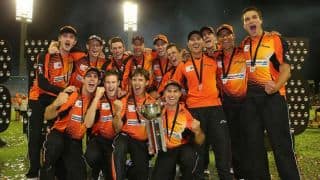