If the selection of Pollard and Sunil Narine were not surprising enough because of the selection criteria, the selectors went on to omit Chris Gayle, Darren Sammy, Andre Russell and Dwayne Bravo from their side.

Kieron Pollard’s last ODI was against India in October 2014 and his last List A game was in January 2015. This means he has not played List A cricket for almost a year and half now and despite that he found himself a place in the West indies 14-man squad for the first four matches of the upcoming tri-series ODIs that features Australia and South Africa.

If the selection of Pollard and Sunil Narine were not surprising enough, the selectors omitted Chris Gayle, Darren Sammy, Andre Russell and Dwayne Bravo from their side. The relationship shared by the West Indies cricket board and their players is no secret, and post this selection, few of the senior cricketers jumped on Twitter to express their surprise.

While T20 skipper Sammy congratulated Pollard over his selection, he also questioned him for what had he done to qualify.

Gayle too expressed his surprise through his tweets. It was the board who had stopped Narine from playing in domestic List A tournament and now they had picked him.

Pollard wondered if he will ever come to know about the reality behind his axing in the first place.

Think the truth.. Or real reasons of expulsion will finally come out??? Have been baffled for 15months.. Then Pingo https://t.co/PlaKS5pj5Z — Kieron Pollard (@KieronPollard55) May 19, 2016

Replying to Sammy, he tweeted:

Bingo or I should say Pingo.. Numbers shuffled and up popped P55..!! Or should I lucky days!! Check QPCC stats.. https://t.co/yERklQZ1BG

Even Dwayne Bravo joined the bandwagon and went on to term the West Indies’ selector’s logic as the ‘joke of the day’ as the cricketers were told that they have to be available for the domestic tournament in order to get selected for national side. Had Pollard been fit during the domestic 50-over tournament, he would have still played the Big Bash League (BBL).

Joke of the day: WI selectors One minute Pollard & Narine were not good enough & now are perfect for Tri Nation series? It’s like magic! — Dwayne DJ Bravo (@DJBravo47) May 19, 2016

Despite these, the players have remained united and shared a great bonding. The side went on to lift the ICC World T20 2016 earlier this year. However, West Indies cricket and its unique ways, we cannot expect for logic.

Gayle, Bravo, Pollard, and Narine are currently playing in the Indian Premier League (IPL), while Sammy too is in India, commentating in the cash-rich tournament. 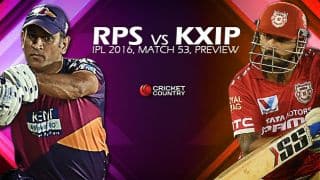