The scenes at Barabati Stadium in Cuttack on Monday witnessed terrible behaviour from the spectators as the visitors were cruising towards a series win.

Ironically the series between India and South Africa is named after two men who believed in complete non-violence — Mahatma Gandhi and Nelson Mandela. The scenes at Barabati Stadium in Cuttack on Monday witnessed terrible behaviour from the spectators as the visitors were cruising towards a series win. [Pick of the tweets: India vs South Africa, 2nd T20I at Cuttack]

Chasing only 93 for a win, South Africa were placed at 64 for 3 in 11 overs when a major section of the crowd started hurling bottles at the ground. The hooliganism brought memories of the Eden Gardens match in the 1996 World Cup semi-final between India and Sri Lanka. [Twitteraties troll Ambati Rayudu after he gets bowled off a full toss]

The crowd trouble was the talking point on Twitter and users didn’t hesitate to poke fun at or criticise the Orissa crowd for the unruly behaviour.

No peace and love. They should change the name of the series from ‘Gandhi-Mandela’ series to ‘Togadia-Owaisi’ series.

Sad & embarrassing. Can never relate to such intemperate behaviour. There will be days when team doesn’t click.Where’s the sporting spirit?

Since the match threatened to fold up early, maybe TV sponsors egged people to throw things on ground so that all ads can play?

Don’t condemn people throwing bottles. Its a brilliant plan to force the match referee to call off the match and make sure India don’t lose.

By throwing bottles on ground, people at Cuttack Stadium have proved that they are just ‘plastic’ fans of cricket.

Disgraceful scenes in Cuttack. Nobody has a right to throw bottles onto the ground. Crowd performance worse than that of the players.

WTF? The Crowd is now throwing bottles on the cricket ground? What happened to the good old days of setting fire to the stadium?

The crowds may be upset with the way India played this evening but the way they are behaving is very disappointing. #IndvsSA

After origins of Rasgulla, Cuttack and Kolkata will now fight over origins of throwing things on cricket ground when India plays shit.

Bottles being thrown in the field..looks like Stuart Binny has an important role to play in today’s match. #IndvsSA 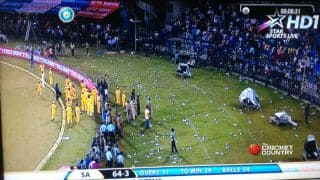 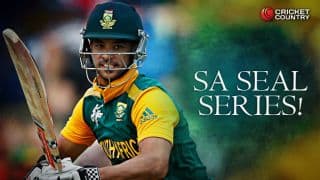