A fantasy playing XI of cricketers who dabbled in politics after retiring from the game.

There is little that separates cricket and politics in most of the cricket playing nations, including India. A legacy of British colonisation, cricket is the most popular and cash-rich sport in the country. The quantum of money involved in it attracts the politicians to gain control over the sport and no wonder they end up heading the state cricket associations as well as the Board of Control for Cricket in India (BCCI). Keeping the power equation aside, some politicians get involved with it for the sheer love of the sport. Quite a few Australian & British Prime Ministers have been known for being avid cricket fans.

However, reversely, there have been a few cricketers who have developed fondness for politics. A prime example is Pakistan’s current premier Nawaz Sharif, who is a former First-Class cricketer himself. Recently, politician Lalu Prasad Yadav’s son Tejashwi Yadav — who too has been a First-Class cricketer and has played alongside the current Indian players like Virat Kohli, Ishant Sharma, Varun Aaron and Umesh Yadav in age-group and domestic circuit — became Bihar’s deputy chief minister. With his foray into politics after a brief stint in cricket, Chinmay Jawalekar couldn’t help but think of all those cricketers who have dabbled in politics post-retirement from the game. He comes up with a dream playing XI comprising of most prominent of such players.

One of the most explosive batsmen of all time, Jayasuriya revolutionised the way One-Day International (ODI) cricket is being played. With over 20,000 runs and 400 wickets in international cricket, he is easily one of the best all-rounders to have played the game. After retiring from the game, Jayasuriya has been elected as the Member of Parliament from his native Matara district for one full term and has served as the deputy union minister of Postal services and later as the deputy union minister of Local Government & Rural Development under president. With these credentials, he easily finds a place in the team as its opener.

A dogged and courageous batsman, Chauhan played 40 Tests for India between the period of 1969 to 1981 and was involved in numerous vital partnerships with Sunil Gavaskar at the top. Post-retirement, he has twice been a Member of Parliament from Amroha constituency in Uttar Pradesh. With a sound technique and solid temperament, he fits into the team as an apt partner to Jayasuriya.

Donning many hats with ease, Navjot Singh Sidhu has dabbled in a wide array of things post cricket, including politics. With over 7,500 international runs and twice being a Member of Parliament from Amritsar constituency, Sidhu finds a place in this XI.

A batsman in the classical mould, Mohammad Azharuddin, or simply Azhar, led the Indian team for the much of the 90s. A 99-Test and 334-ODI veteran, Azhar joined the Indian National Congress party later and became the Member of Parliament from Moradabad constituency in Uttar Pradesh. His presence in the middle-order boosts team’s batting capabilities.

The leader of this pack, Sir Frank Worrell is one of the most respected cricketers of all time. A stylish right-handed batsman and an effective left-arm medium pacer, Worrell scored over 15,000 First-Class runs at an average above 54 and picked up close to 350 wickets. Knighted for his services to cricket in the year 1964, Worrell’s Test average from 51 matches is just shy of 50. With these phenomenal figures and the fact that he was appointed to the Jamaican Senate by Sir Alexander Bustamante, Worrell not just makes it to this side, but also gets to lead it.

Arguably Sri Lanka’s greatest captain ever, Ranatunga led the unheralded side to the World Cup title in 1996. He played 93 Tests and 269 ODIs for Sri Lanka throughout his career spanning 18 years. He joined active politics after retiring and has been a Member of the Parliament of Sri Lanka for Gampaha constituency. Earlier this year, he was appointed as the Minister of Ports and Shipping. In the past, he has held the post of Sri Lanka’s Deputy Minister for Tourism. His credentials make him an important member of this team.

Hashan Tillakaratne is yet another key member from the 1996 World Cup winning Sri Lankan team who makes it to this side. A wicketkeeper -batsman, he played 83 Tests and 200 ODIs for his country and even led the Test side towards the fag end of his career. Since retiring, he has been actively involved in Sri Lankan politics by joining the United National Party. He has also been appointed as the party’s organiser for Avissawella constituency in Colombo. Tillakaratne, whose presence at 7 makes this team a strong batting unit, keeps the wickets for this team.

Undeniably the finest cricketer ever to come out of Pakistan, Imran Khan became the sporting hero of the nation and a perfect role model to emulate with his on-field heroics. The 88-Test veteran captained Pakistan to the 1992 World Cup win and etched his name in the history forever. With a Test batting average of close to 38 and bowling average of just below 23, he is regarded as one of the all-time best all-rounders. After retirement, he founded the Pakistan Tehreek-e-Insaf political party and became its chairman. He has since been an elected parliamentarian of his native constituency Mianwali in the National Assembly and a leading Pakistani opposition politician. He loses out the captaincy of this team narrowly to Worrell, but gets the vice-captaincy.

Kirti Azad played 7 Tests and 25 ODIs for India during 1980 and 1986. An attacking batsman and a quickish off-spinner, Azad is the son of former Chief Minister of Bihar Bhagwat Jha Azad. Hence, it was only natural of him to pursue politics once he was done with cricket. He joined the Bhartiya Janta Party (BJP) and is currently serving his third term in the Lok Sabha from Darbhanga constituency. His all-round ability makes him a utility player and helps him seal a place in this illustrious team.

One of the fastest and most feared bowlers of all time, Sir Wes Hall took 192 Test wickets during his career that spanned a decade. Post-retirement, he served in both the Barbados Senate and its House of Assembly, and became the island’s minister for tourism in 1987. He was knighted in the year 2012. His remarkable achievements make him the spearhead of this team’s bowling attack.

The originator of reverse swing, Sarfaraz Nawaz played a crucial part in Pakistan’s maiden Test series wins over India and England. He formed a potent bowling partnership with Imran and took 240 wickets in 100 international outings for his country. Nawaz served Pakistan cricket not only during his playing days, but also past them, as he passed on the legacy of reverse swing to the young Wasim Akram and Waqar Younis in the late 80s. He gained the membership of Parliament by winning the general elections in 1985 and served for the seat for three years. Later, in 2011, he joined the Muttahida Qaumi Movement (MQM) party. He is an integral part of this team and along with his former partner Imran and the legend Hall, forms a formidable pace trio.

The team has quite a few players with exceptional leadership skills. Imran and Ranatunga have been inspirational leaders having won the cricket World Cup for their respective countries. Azhar has led the Indian side for most part of the ‘90s decade with distinction, while Jayasuriya too has had tasted success during his tenure as Sri Lanka captain. But it is Sir Frank Worrell who gets to lead this side. West Indies’ first appointed black captain, Worrell is remembered as a strong leader and a uniting force who had a charismatic influence on the team.

The team looks extremely good on paper and has all its bases covered. In fact, it has all that it takes to excel in different conditions. Its engine room (top-3 batsmen) is a fine mix of caution and aggression. Openers Jayasuriya and Chauhan complement each other well, as the former plays attacking game while the latter holds the other end up. Sidhu at three provides stability to the top-order. He can play both attacking as well as defensive game, whatever the situation demands. With Azhar, Ranatunga and Worrell at 4, 5 and 6, the middle-order is as good as it gets. Tillakaratne at 7, followed by all-rounders Imran and Azad, gives depth to the batting line-up.

The team has four proper pacers (Imran, Nawz, Hall and Worrell), which will help it in pace-friendly conditions. It also has two spinners in Jayasuriya and Azad and a part-timer in Chauhan, which means the team can do well in the subcontinent as well. With a proper all-rounder in Azad at No. 9, team’s batting too is superlative. It has five specialist batsmen, three world-class all-rounders (plus Azad, who’s a decent all-rounder too) and two specialist bowlers. On the whole, this looks to be a team-to-beat. 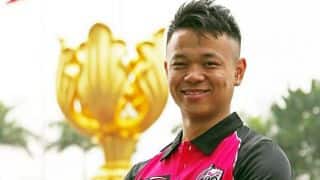