Indian Premier League (IPL) has redefined cricket in lot of ways and changed the sporting scenario in the country.

Indian Premier League (IPL) has redefined cricket in lot of ways and changed the sporting scenario in the country. For days, under extreme conditions the franchise’s battle for the much coveted trophy. In the grand finale, the team that fares better wins the tournament and it’s an extraordinary individual feat which determines the outcome.

There have been eight IPL finals and Suvajit Mustafi lists out the eight players who made the difference for their sides and were awarded the man-of-the-match.

Yusuf Pathan made the difference for RR in the tournament final. He bowled exceptionally well and gave away 22 runs from his four overs – picking the wickets of Parthiv Patel, Vidyut Sivaramakrishnan and Albie Morkel. His spell helped RR restrict CSK for 163. Later, with the bat he gave the RR’s innings the much needed momentum. He scored 56 from 39, as RR with three wickets in hand clinched the last-ball thriller.

RCB skipper Anil Kumble did everything right and got his side close to winning the tournament. Opening the bowling the leg-spinner bowled his quota of four, giving away just 16 runs and picking up the wickets of Adam Gilchrist, Andrew Symonds, Rohit Sharma and Venugopal Rao.RCB restricted DC to 143 but still went on to lose the encounter by six runs. It’s the only instance in IPL where the man-of-the-match was awarded from the losing team.

CSK got off to a slow start and when the second wicket of Matthew Hayden fell, the side were reeling at 47 in the ninth over. Raina, who was in a sublime form, turned the match on its head. His unbeaten 57 from 35-balls helped CSK post 168 for five. In the end, that turned out to be a match-winning total as CSK beat MI by 22-runs.

CSK’s opening stand proved to be the differentiator. Murali Vijay and Mike Hussey added 159 runs in 14.5 overs. The brutal start helped CSK get to 205 for five and Vijay slammed 95 from 52-balls, in an innings that contained six sixes. RCB were restricted to 147 as CSK cruised to an IPL title for the second time.

When CSK posted 190, they looked set for their third title but a defiant knock from KKR opener Manvinder Bisla denied them from having that. Bisla’s 89 from 48 ensured KKR completed the chase with two balls to spare, as the side ended the CSK reign to be crowned the IPL champions for their maiden time.

MI were in a spot of bother when Kieron Pollard stepped in to bat. They were 52 for four in the 10th over. From thereon it was a Pollard show as the Trinidadian all-rounder launched a counter attack to take MI to a respectable 148. Pollard remained unbeaten on 60 from 32-balls, in a pitch that favoured bowlers. Pollard also picked up the wicket of Ravichandran Ashwin as MI restricted CSK to 125 to win their first IPL.

Wriddhiman Saha’s hurricane unbeaten 115 lifted KXIP to 199. Chasing 200 in the final wasn’t going to be an easy ask for KKR but Manish Pandey didn’t give up for a moment. It was a serene display of classical strokes mixed with brutal onslaughts, as Pandey scored a match-winning 94 from 50-balls to help KKR win their second IPL title.

MI skipper Rohit Sharma came into bat when they were one down for only a run on board. They lost the in-form Parthiv Patel to a run out. CSK’s Ashish Nehra was bowling well and in a high pressure final, the need was to consolidate but Rohit attacked from the word go and his 50 for 26 balls set-up the platform for MI, who scored 202 for 5. Rohit then marshalled his troops well as MI beat CSK by 41-runs to win their second IPL title. 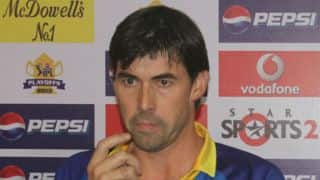 Sachin Tendulkar: It was about key players getting the momentum