The duo are planning a wedding next year.

TV presenter Erin Hollard revealed that she has accepted a marriage proposal from her fianc , Australian cricketer Ben Cutting. The duo are planning a wedding next year.

The 30-year-old model took to Instagram on Tuesday to share a romantic black and white snap with Ben and announced the details ahead of their nuptials.

Made a few plans to marry this guy, today. Bring on 2020, she wrote in the caption without revealing the day and the month.

Earlier, Holland hinted where she and Ben want to get married. Ben and I are definitely beachy people… Wherever we have it, it will definitely be coastal and warm, she told Wedded Wonderland back in June.

She also admitted that the pressure of finding the perfect bridal attire was making her nervous. I am scared it will be difficult to find something that feels different and special enough for such a momentous occasion, she said.

But she described that her dream dress would be extravagant, timeless and chic .

Holland, also a renowned television presenter for the past few years, has anchored several cricket shows which has taken her around the world to the UK, India, Pakistan and Canada. If Shikhar continues working on his fitness, he will be unstoppable: Harbhajan Singh 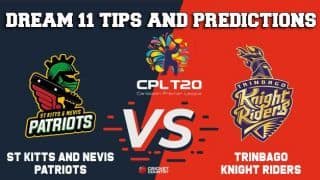