1. Farming household: De Villiers was born in a farming Afrikaner-speaking household in Free State and grew up idolising rugby players. Growing up in the countryside, the only cricketers he had heard of were Clive Rice, Graeme Pollock and Garth Le Roux.

2. Didn t know the name Nelson Mandela : The media wasn t allowed to write about Apartheid in South Africa as the government controlled it. Throughout his childhood and teens, de Villiers didn t know who Nelson Mandela was. In an interview with ESPNCricinfo, de Villiers admitted, When I started studying, at about the age of 19-20, I started finding out about Mandela. So how many fingers can you point? Basically, media controls knowledge.

3. Army and discipline: In his early 20s he became an Army lieutenant. His day began at 3 in the morning and was done with breakfast by 5 am. He believes that the army stint helped him with his discipline and wishes that if youngsters went through this they would all turn into solid citizens.

4. Nearly lost his eye: While he was in army, in a freak accident he almost lost his eye. De Villiers was a couple of meters away from a road construction site. Heated lime that is used for building roads hit his eyes and he lost vision for almost a week. Six of the eight layers of his eyes were burnt off. Even today when he closes his eyes, he can spots because of it.

5. Problems with English:Despite learning English in school, de Villiers couldn t speak it well and that s a barrier he had to overcome as an international cricketer. In an interview, he said, I could only understand and read and write. When I spoke English, I sounded stupid. Language is a terrible barrier.

6. Vinnige Fanie: De Villiers was a very popular cricketer and he was known by the nickname Vinnige Fanie by his Afrikaans-speaking fans. The nickname means Fast Fanie .

7. Javelin thrower: He has represented South African Schools as a javelin thrower. He believes that he could have done it at international level but it was because of a back injury he couldn t continue it further.

8. First-Class debut: He made his First-Class debut in 1985 for Northern Transvaal B against Natal B. He picked up a fifer in the second innings and one of his wickets was his future national teammate for long, Andrew Hudson.

9. International cricket: De Villiers first played for South Africa in December 1992 under Kepler Wessels captaincy. He starred in a win against the touring Indians in a One-Day International (ODI) at Cape Town. He had figures of 7-0-24-0. A year later, he made his Test debut in the Boxing Day Test at Melbourne but the only wicket he picked up was of Shane Warne.

10. Making it big in his second Test: Australia and South Africa squared off in a spin-friendly wicket at Sydney for the second Test of the series. Warne picked up seven wickets in the first innings and helped Australia get a 123-run lead. Warne picked five again and all South Africa could set was a target of 117. But from then on it was a de Villiers show. His off-cutters and out-swingers proved too hot for the Aussies as the No.1 Test team bundled out for 111. De Villiers, with 6 for 43 in the second innings, went on to bag match figures of 10 for 123. He was awarded Man of the Match in what was his second Test.

12. Making Sachin Tendulkar his bunny: Ask any bowler around the world in the 90s and they will tell you that one of their biggest challenges was conquering a man called Sachin Tendulkar . However de Villiers was one bowler, who even the master had a tough time mastering. De Villiers troubled Tendulkar and got him out a couple of times in 1996. De Villiers said to ESPNCricinfo, County cricket taught me how to bowl the off-cutter, which is what you should bowl to Tendulkar all the time. I am not talking slower balls the fast off-cutters.

13. County cricket: De Villiers has played county cricket for Kent in the 1990 season and by his own admission it s there where he learned to master his lethal off-cutters.

14. Best in the world with that off-cutter : De Villiers bowling partner Allan Donald was renowned for his pace but when it came to bowling off-cutters, none could match him. Recalling his glorious days, de Villiers told ESPNCricinfo, I reckon I was the best in the world with that off-cutter. Without slowing it down. It went whirrrr. And it worked like a bomb. I took a lot of wickets in England with off-cutters. Grassy wicket, bowl off-cutters. We had a game here where the West Indian A side had nine left-handers. I took eight of the nine. I could have used that more if we had played a lot of Test cricket in India.

15. Bowling style: Despite being mainly a swing bowler, de Villiers could easily clock close to 140 kmph but as wily that he was, he mastered the art with change of pace. Without any change in action, he could drop his pace to 10 kmph to 20 kmph, often deceiving batsmen.

16. A teacher: Despite wanting to be a top-notch athlete, de Villiers studied to become a teacher and attained a university degree. He considers himself to be a scholar and claims has got a library at home.

17. Poetry lover: After turning 40, de Villiers has found love for poetries. He believes it s the next phase of life.

19. Charity: De Villiers sibling and daughter are both deaf and he was involved in raising money for deaf charities. He raised R800,000 cycling from Cape Town to Pretoria and R189,000 by sitting over a floodlight tower during a Test at Centurion. Along with former cricketer Andrew Hall, de Villiers runs an organisation called HEAR. They help challenged kids receive implant that allow them to hear.

21. When he felt like punching Hansie Cronje: De Villiers is a countryside bloke and likes to keep things simple. He gave it all when he played for his country and in an interview he revealed that he was furious when he came to know about Hansie Cronje s involvement in match-fixing. He said he would have even punched him. However, he also admitted that Hansie was the best captain he played under.

22. The son who idolises Glenn McGrath: His son is a cricketer and in 2012 spent time in India trying to better his skills as a pace bowler. In an interview with Times of India, Fanie junior said, Yes, dad is a legendary cricketer. But [Glenn] McGrath is my role model.

23. Cobus Pienaar: Jacobus Johannes Pienaar, better known as Cobus Pienaar is de Villiers nephew. He is an effective all-rounder at the First-Class level.

25. Impressive record: De Villiers represented South Africa in 18 Tests and 83 ODIs. He picked 85 wickets in Tests at 24.27. He was a dependable batter lower down the order, scoring two fifties in Test cricket and averaged close to 19. In ODIs, he claimed 95 wickets at 27.74 but what s more impressive is his economy rate of 3.57. 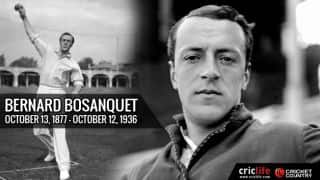