After a remarkable victory in the first Ashes Test at Cardiff, England lost their way in the second Test at Lord’s.

After a remarkable victory in the first Ashes Test at Cardiff, England lost their way in the second Test at Lord’s. Australia wrecked more agony as they recorded their third highest victory over England in terms of runs. Suraj Choudhari digs deep and points out five reasons why England suffered this humiliation at cricket’s home.

Root starred with the bat in the Cardiff Test as he scored 194 runs in both the innings despite losing early wickets. In the first Test he not only negotiated the pumped Australian attack but along with Ben Stokes he also scored runs at a quick pace. In the second Test too, he came out to bat in a similar situation to that of the Cardiff Test, but this time they were trailing by a huge margin. He’s been a consistent run-scorer and his failure with the bat broke the spine of England’s middle-order. In both the innings of the second Test, Root just managed scores of one and 11 respectively. England are heavily reliant on Root and Australia’s Steve Smith inflicted some serious damage on England. Both, Smith and Root possess similar all-round skills and shoulder similar responsibilities with the bat for their team. Either of them shining boosts the chances of their respective sides.

As the cliché goes — ‘Catches win matches’. But it stands very true for cricket. In a format like Test, one just can’t afford to put a foot wrong and England certainly missed out on that. English players’ buttery fingers gave Aussie batsmen a lot of reprieve. For instance, Steve Smith was dropped by Ian Bell at slips when he was batting on 50. Smith made the extreme use of the life as he went on to register his maiden double-century. A dropped catch hinders a bowler’s confidence and apart from this, their ground fielding was rather a slack.

3.  Failure at the top-order

England’s top-order is yet to fire. In both the Test, the highest partnership recorded by their openers is just 17. They have struggled against the new ball and Adam Lyth’s inconsistency along with Ian Bell’s lack of form has taken a heavy toll on them. Gary Ballance too has not got his feet moving and looked vulnerable against short pitched deliveries. Since November 2013, England’s top three batsmen on an average have contributed a mere 33 runs. Their batting line-up looked too was prejudiced. Root being in form continues to bat at five. Perhaps, if he would have batted higher up the order, England’s scenario might have been different. It’s a common sense that your best batsman of the team should bat higher up in the order, but England once again showed their conservatism.

4.  James Anderson’s lack of form against Aussies at Lord’s

James Anderson means business in Test cricket; he’s been one of the most lethal swing bowlers for England in the Test format and prolific too. But his effectiveness comes to a standstill against Australia at Lord’s. He has just seven wickets against the Aussies in three Tests that he played at the Mecca of cricket at an awful average of 51.14. England rely heavily on Anderson to bail them out and his failure with the ball has cost them heavily.

5.  Failure to absorb pressure and over reliant on home conditions

Australia posted a mammoth total of 566 in the first innings at Lord’s as a result of which the pressure was back on England. They failed to absorb this pressure and fell prey to Australia’s persistence. It’s always a smart move to use home conditions to a good effect but England seem to rely heavily on it. After a shameful defeat in the first Test, the onus was on Australia to make a comeback and England failed to take advantage of this. Their batting line-up’s dramatic collapse in the second innings is an evidence that they crumble under pressure. VVS Laxman: No one is bigger than cricket 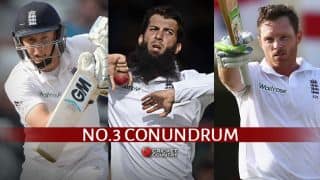