Yuvraj Singh and Zaheer Khan have been best of friends.

They have shared the dressing room for almost a decade and half, and they continue to do so at Delhi Daredevils (DD) now. Yuvraj Singh and Zaheer Khan have been best of friends. Having received their India caps together in the first match of the Champions Trophy in October 2000, it has been a long journey together for the duo.

Zaheer’s career has been marred by serious injuries and it also prevented the ace bowler in playing the first seven games for DD this season. However, he made a strong comeback in Friday’s game against Kings XI Punjab (KXIP) and made a huge impact. His inclusion bolstered the bowling attack as they dismantled KXIP for a miserable 118 runs.  Zaheer clinched two early wickets which turned the match in their favour, eventually DD won the match quite convincingly. His wicket came in the second ball that he bowled and it was of his long time India teammate Virender Sehwag.

Yuvraj uploaded the picture of the duo from his Instagram account and hailed Zaheer for his valiant effort in his first IPL match this season.

Zakattack is back ! Happy to see u playing again fella ! great effort today by the @officialdaredevils @zakkhan34

In the above picture Zaheer and Yuvraj are seen happily posing for a picture in the team bus. The team might be hoping to keep this momentum going and make it to the playoffs. They are now well placed at the fourth position in the points table. 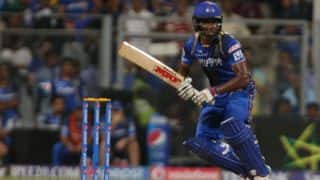