In no time, the commentary box, the crowd and the Twitterati started talking about Bailey's hat.

Australia’s ever-smiling cricketer and former captain George Bailey set the cricket lovers abuzz during the first One-Day International (ODI) against India, not for his batting though. The moment Australian team took the field; Bailey grabbed the eyeballs for the golden floppy hat that he was wearing.

In no time, the commentary box, the crowd and the Twitterati started talking about his hat. The commentators heaped praises, the crowd was all behind him and as he performed a regulation piece of fielding at cover, the admiration only grew.

The hat he was sporting was a wide-brimmed floppy hat, a sight that has become very rare in modern limited-overs cricket these days. However, the hat still remains a popular option in Tests. Bailey’s act earned widespread respect as well as admiration. Let’s check how Twitter reacted on this:

Thoughts on George Bailey bringing back the gold floppy for the #AUSvIND series? #styleking pic.twitter.com/7hY18P9doE

Of all the Twitter parody accounts out there, the twin George Bailey’s hats are the ones you can see standing the test of time. #AUSvIND

@Georgebailey_82 hey George. If it’s not to much trouble can you send me that yellow hat. I love it!!!

We salute you George Bailey and your legendary wide brim… #AUSvIND pic.twitter.com/ovQ0DAxzNn 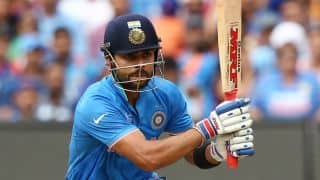