Ghulam Ahmed, born July 4, 1922, was a former Indian captain and the first great off-spinner the country produced. Shiamak Unwalla looks at 10 interesting facts about the man who helped India win their first Test.

There have been many Indian off-spinners who have done exceedingly well in Test cricket: Erapalli Prasanna, Srinivas Venkataraghavan, Harbhajan Singh, and Ravichandran Ashwin to name a few. But theyhave all followed in the footsteps of Ghulam Ahmed, who was the first great off-spinner India produced.

India took on England at Chennai [then Madras] in 1951-52. VinooMankad snared eight for 55 in the first innings as England crashed to 266 all out. India responded with 457, thanks to centuries from Pankaj Roy and Polly Umrigar. Ahmed and Mankad then combined to rout England for 183, with both men taking four wickets apiece as India won a Test for the first time.

Ahmed was a powerful batsman, buthe rarely played a long innings. He was capable of digging in on occasion though, and once scored 50 batting at No. 11 against Pakistan in 1954-55. He added a crucial 109 for the 10th wicket with Hemu Adhikari (81 not out), as India got to 372. It proved to be a match-winning stand, as India won by an innings.

Ahmed was responsible for one of the most shocking periods of Indian cricket. During West Indies’ tour of India in 1958-59, Ahmed was the first-choice captain of the side. Unfortunately he was not fully fit in time for the first Test, so Polly Umrigar led the team. He was back in time for the second Test, and captained in the third Test as well. However, India were blown away, and Ahmed retired immediately after the Test. After that, things got bizarre.Umrigar was slated to lead again, but pulled out at the last minute and was replaced by Mankad. India were trounced in that match as well, and Mankad fell ill with food poisoning during the Test. Hemu Adhikari was then named captain of the next Test, though the selectors wanted to name Gulabrai Ramchand captain. As a result of all the pandemonium, India fielded four captains in five Tests that series. The farce continued when the next two Tests were again captained by two different men!

In one of the most interesting co-incidences in International cricket, Ahmed ended up playing his final Test (though he may or may not have known it at the time) at Eden Gardens, the ground on which he made his debut. That was not all; he made his debut against West Indies in a match starting December 31, 1948. His final Test came against West Indies again in a match starting on — you guessed it — December 31,1958!

As a result of his easy-flowing and stress-free action, Ahmed was capable of bowling for long periods of time. He was no stranger to marathon spells; he once bowled 92 overs and three balls for Hyderabad in a Ranji Trophy match against Holkar — a record at the time.

In 22 Tests, Ahmed took 68 wickets at 30.17. However, he played 14 of those matches at home, where he took 44 wickets at 30.59, while his eight away Tests brought him 24 wickets at 29.41. He remains one of the very few Indian spinners who actually performed better away from home.

Apart from captaining Hyderabad for several years, Ahmed took 187 wickets for Hyderabad at 19.55 with 20 five-wicket hauls (including a nine-for) and six 10-wicket hauls.

After his playing days, Ahmed became secretary of the Board of Control for Cricket in India (BCCI) for five years from 1975 to 1980. 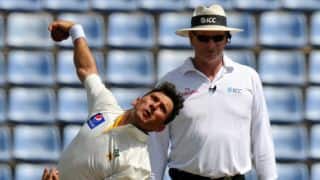