Get the live updates, most hilarious tweets and lot more on ICC World T20 2016 super 10 match between Sri Lanka and Afghanistan at Kolkata.

Sri Lanka will take on Afghanistan in the 16th game of the ICC World T20 2016 at Eden Gardens in Kolkata on Thursday. It’s an important game for both the teams as they will look forward to start the tournament on a winning note. Live Streaming, ICC World T20 Super 10 stage: Sri Lanka vs Afghanistan at Kolkata

Afghanistan have been in alluring form as they have drilled hard and sculpted a spot in the Super 10s. They have a well seasoned team and one can expect them to create an upset here at Kolkata. The likes of Asghar Stanikzai, Amir Hamza, Dawlat Zadran, Mohammad Nabi, Mohammad Shahzad and Samiullah Shenwari.

For Sri Lanka, they have gone through a rocky patch in the recent times and will look for revival of fortunes in this game. They have some good players of the game with Dinesh Chandimal, Dushmantha Chameera, Thisara Perera and Tillakaratne Dilshan. These are proven match winners and can turn the game within a span of few overs.

Expect a run-fest when these two teams battle it out for priceless points at Kolkata. We present you with the pick of the tweets.

Well played, Afghanistan. An associate team gave the T20 Defending Champions a run for their money. This is what sport is all about. Love!

Afghanistan is practically learning what 2 sides of a coin means. Having Inzamam as the coach of the side #AFGvSL

Brave batting. Good bowling. But big let down in the fielding department by Afghanistan. #WT20

One cop got hit by a Dilshan six straight on the heart today at the Eden Gardens and he’s the luckier guy https://t.co/xGRqhnuFB1 #AFGvSL — Monish (@Crownish) March 17, 2016

Afghanistan showing their inexperience. Not a wise thing to attack the ball and leave the gap when there’s dew#WT20 #AFGvSL #SLvAFG — Sarang Bhalerao (@bhaleraosarang) March 17, 2016

If #AFG able to move #Dilshan with 2 overs , they will reach to very much close to defeat #SriLanka …#AFGvSL #T20WorldCup — Ahmed Kazim (@Ahmedkazimkabir) March 17, 2016

If there is something like Kolpak kinda rule in Pakistan, Nabi would now be playing for them. Classical action! #WT20 — Ravi Maestri (@ravimaestri) March 17, 2016

Dilshan is doing everything in this match including helping #AFG take wickets #Pro — Monish (@Crownish) March 17, 2016

Everything is fine. Magar coach’s fitness is reflected in the fielding#AFGvSL — Sana fazili (@FaziliSana) March 17, 2016

It Seems, Srilanka is also feeling unsafe in India, They want to go home as early as possible. #AFGvsSL #SLvsAFG — Sunil- The Cricketer (@1sInto2s) March 17, 2016

Whattay Run out! Gone from a cm! Is this the turning point? Hoping against hope! #AFGvSL #T20WorldCup — Rafay Zia (@proximitybomb) March 17, 2016

Really like the #Afghanistan team. So intense and putting up a good spin bowling show. #AFGvSL — Ashutosh Lall (@AshuLall) March 17, 2016

“Fearless Cricket” is how I would describe Afghanistan. You cant take them easy and they deserve respect in this format. #AFGvSL #WT20 — Mohammad Kaif (@KaifSays) March 17, 2016

The fact Perera is sent up the order makes one think that SL are nervous about chasing this target. — Subash Jayaraman (@thecricketcouch) March 17, 2016

Afghanistan counter attacked well and have a defendable score. Would love to see them win this one #WorldT20 #AFGvSL — Akash Fotedar (@akashfotedar5) March 17, 2016

#AFGvSL If you r with SL then you r playing w emotion of Tamils but if you r w Afgans then Surely you r Secular Decide yourself — Lalu Prasad Yadav (@laluparsadrjd) March 17, 2016

Fantastic effort by Afghanistan to make 153 against Sri Lanka. We have a game here, if they can hold their nerve (and catch..) — simon hughes (@theanalyst) March 17, 2016

Come on Afghanistan! It’s your game now if you keep up the spirit #SLvAFG — Vikrant Gupta (@vikrantgupta73) March 17, 2016

#slvafg #wt20 So, Afghanistan make a startling comeback to post 153, a score they would have grabbed at the halfway mark. — Waseem Tahir (@waseemtahir23) March 17, 2016

Good batting from #afg. #sl could have done much better in the latter half with the bowling #SLvAFG #WT20 — Tharindu Rusira (@TharinduRusira) March 17, 2016

Must confess didn’t think Afg would get 150. Sri Lanka should get these but at least the Afg batsmen have given their bowlers a chance — Harsha Bhogle (@bhogleharsha) March 17, 2016

Have you been touched by Afghan cricket, baby#SLvAFG — Gaurav Sethi (@BoredCricket) March 17, 2016

You can either cry like Ireland, Netherland and Scotland or force ICC to give you more chances, like Afghanistan or Bangladesh #WT20 #AFG — CrickBC (@crickBC) March 17, 2016

Someone stepping up for Afghanistan every single time. Hallmark of a good team! Way to go Bhais! #WT20 #SLvAFG — Ravi Maestri (@ravimaestri) March 17, 2016

#SL bowling too thin to take them through to the podium…Malinga missed but even his presence might not be enough. #WT20 — Aakash Chopra (@cricketaakash) March 17, 2016

Kolkata has some old connections with ‘Kabuli-walas’. No wonder Eden Gardens is cheering for #AFG #AFGvSL — Sandipan Banerjee (@im_sandipan) March 17, 2016

If there’s a custom of announcing names before match then for #AFGvSL it’ll show “Match delayed due to Names” #WT20 #SLvAFG — OmnisCient I (@koi___nahi) March 17, 2016

Stanikzai! Like Dhoni, standing there when his batsmen fail him. #WT20 #SLvAFG — HoldingWilleyCricket (@holdingwilley) March 17, 2016

Used to play with bombs going off behind the bowlers arm, now distracted by a small light…. #wt20 #afg — Innocent Bystander (@InnoBystander) March 17, 2016

#slvafg “So nice to see the Afghanistan’s colors being portrayed so beautifully by their supporters. — Waseem Tahir (@waseemtahir23) March 17, 2016

Whoa! Dilshan is growing nursery on his head. A true all rounder! — Diwakar (@DiwakarKothari_) March 17, 2016

Heart rooting for Afganistan to cause an upset, but the brain knows better!! #SLvAFG — Ntsika Zimema (@ntsido97) March 17, 2016

Afghanistan is one team who have the potential to cause a hiccup for the Lankans. Looking forward to a good game #WT20 #SLvAFG — Mufthaz (@MufthazItIs) March 17, 2016

Did anyone understand a word of what the Afghani captain said , what is he ??? Afghani Batman !!! #SLvAFG — Ishan Somaiya (@ishansomaiya) March 17, 2016 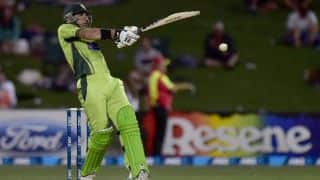