The Virat Kohli-led India marked the 72nd Independence Day by hoisting the tricolour outside their hotel in London on Wednesday. India and England are currently involved in a five-match Test series which the hosts lead 2-0.

In a video posted on the official Twitter handle of BCCI, captain Kohli shared a message wishing everyone on the occasion. “On behalf of the Indian cricket team all the way from UK, here’s wishing everyone a happy Independence Day. Jai Hind,” Kohli said.

MUST WATCH: On Independence Day, members of #TeamIndia came together to honour the tricolour in England. What a proud moment this #HappyIndependenceDay #IndependenceDayIndia

Few from the squad also posted pictures of the celebration on their Twitter handle.

Jasprit Bumrah, who is in line to play the third Test, wrote, “Freedom is nothing but a chance to be better”. Wishing you all a very #HappyIndependenceDay”

“Freedom is nothing but a chance to be better”.

It’s a great feeling to be an Indian. May the tricolour always fly high. Happy Independence Day Jai hind ! pic.twitter.com/qtKTfxP09D

Allrounder Ravindra Jadeja, who is yet to play in the ongoing Test series also posted a picture of him standing next to the flag.

On its official website, BCCI posted a short video of the team members hoisting the tricolour.

The squad left for Nottingham where they will begin their preparation for the third Test which starts from August 18 at Trent Bridge.

India are aiming for a comeback in the series after being humbled in the opening two matches. They lost a close contest at Edgbaston but their vulnerability to swing and seaming conditions was thoroughly exposed at the Lord’s with England completing a massive innings and 159-run win inside three days. 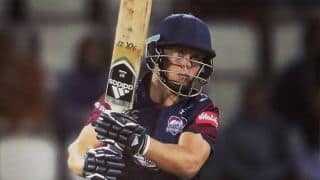