Mumbai Indians (MI) defeated Chennai Super Kings (CSK) in the first qualifier of the eighth edition of the Indian Premier League (IPL) at Wankhede Stadium and sculpted their way to the final.

MI won the toss and elected to bat first. Once again their openers stood up in a crunch game and provided a rollicking start to the team. Lendl Simmons anchored the innings and played a superb knock of 65 from 51 balls, which assisted his team to post a good total. Kieron Pollard came out all guns blazing and played a cameo of 41 off just 17 deliveries. They successfully posted a score of 187 in their 20 overs.

CSK got off to a calamitous start as Dwayne Smith was dismissed by Lasith Malinga in the very first over of their innings. MI bowlers kept chipping wickets at regular intervals and didn’t let CSK to get into the game. Faf du Plessis was the lone warrior for them as he played a decent knock of 45 off 34 deliveries but failed to carry his team over the line. It was a disciplined bowling performance from MI that kept CSK at bay and never allowed them to get close to the target. Despite losing, CSK have another opportunity as they will play the first eliminator on Friday and can make a place in the finals.

Turning Point: The match turned on its head in the 11th over, which was bowled by Harbhajan Singh. Harbhajan took two crucial wickets of Suresh Raina and Mahendra Singh Dhoni with his wily spin. Raina was batting on 25 and was looking to build a platform to capitalize upon whereas, Dhoni was trapped before the stumps on the first ball he faced. 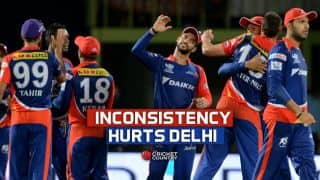