KXIP have now kept their hopes of making it to the playoffs alive with this win and have gained momentum which will help them in the remainder of the series.

Kings XI Punjab returned from the dead and emerged victorious in the 36th game of the Indian Premier League against Delhi Daredevils at Mohali on Saturday. KXIP have now kept their hopes of making it to the playoffs alive with this win and have gained momentum which will help them in the remainder of the series. Marcus Stoinis had a terrific overall outing and helped his side in registering their third victory of the season. IPL 2016, Match 36, Pick of the tweets: Kings XI Punjab vs Delhi Daredevils at Mohali

DD won the toss and opted to bowl first, their bowlers weren’t up to the mark as they leaked too many runs with the new ball. Marcus Stoinis batted exceptionally and scored a half-century despite losing wickets at the other end. Wriddhiman Saha played a much needed innings and provided impetus to KXIP’s innings. Akshar Patel too played a good hand lower down the order with his 16 from just 5 deliveries. KXIP, somehow managed a fighting total of 181 in their 20 overs and gave their bowlers a fighting chance against the star studded batting line up of DD. Virat Kohli’s sensational hundred helps RCB triumph over RPS: Twitter Reaction from Cricket Fraternity

KXIP had a huge target to chase but their openers did a good job and got their team to a cautious start. Quinton de Kock looked good and smashed 52 from just 30 deliveries but floundered to a slower delivery from Stoinis. Sanju Samson was also instrumental with his 49 but things changed in the death overs for DD. Eventually, they fell short of 9 runs as KXIP bowlers did a commendable job with the ball in death overs. Mohit Sharma and Sandeep Sharma bowled magnificently to restrict DD from chasing down the total.

Carlos Brathwaite looked threatening but his innings was curtailed by Sandeep Sharma which probably shattered all the hopes for DD. It was some sensational death bowling which saved the day for KXIP as the ball looked in DD’s court for most of the part in this game. Vinod Kambli might have been more talented than Sachin Tendulkar, says Kapil Dev 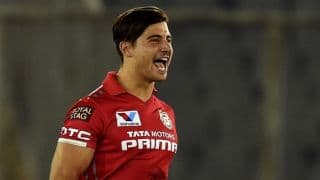