Get the live updates, most hilarious tweets and lot more on match No. 1 of IPL 2016 between Mumbai Indians and Rising Pune Supergiants here.

So, the World T20 2016 is a thing of the past now and the fans are gearing up for the ninth season of Indian Premier League (IPL) which gets underway in Mumbai on Saturday. The tournament opener will see defending champions Mumbai Indians (MI) take on the new member in IPL family the Rising Pune Supergiants (RPS).

MI will be beaming with confidence ahead of the first match as they begin their title defence in front of their home crowd. With the likes of skipper Rohit Sharma, Lendl Simmons, Lasith Malinga, Kieron Pollard, Harbhajan Singh, Corey Anderson and Jos Buttler in their ranks, they appear to be the team to beat. However, it is hard to make predictions and declare one team a clear favourite in T20s. IPL 2016, Live streaming: Mumbai Indians vs Rising Pune Supergiants at Mumbai

While many will tip MI to win this encounter as they have a settled unit as compared to a newly-formed franchise which is making its debut, the RPS can be written off only at ones’ own risk. Any team that is lead by MS Dhoni can never be ruled out from the title race. During his eight years’ stay with Chennai Super Kings (CSK), Dhoni led his side into the semi-finals on every single occasion, thus making it the most consistent franchise. He will look to replicate the same success with RPS as well.

In Kevin Pietersen, Faf du Plessis, Ravichandran Ashwin, Steve Smith and Ajinkya Rahane, he has a strong group of core players with whom he can script a success story. The match that begins at 8 PM will mark the beginning of the seven-week carnival. It is expected to be the top trend and as always, we will bring you the best of the social feeds, including some hilarious tweets, from the match in this space. So keep calm and enjoy the game with our presentation.

It Sucks To Be On The Winning Side. Sorry #MI, Will Try My Best In Next Match. #MIvRPS #RPSvsMI #IPL9 #IPL2016

Mumbai crowd would take that defeat in their stride, that it was a Mumbai boy Rahane who did the Mumbai Indians in tonight.#IPL2016

RPS win. We are known to be slow starters but @ImRo45 & team will look to bounce back stronger next match! #MIvRPS #DilSeIndian

SIX! Rahane has clearly learned something from Dhoni! #IPL #MIvRPS

Mumbai Indian fans when people ask them, “Is this the same Mumbai Indians team that won the IPL finals last year?” pic.twitter.com/nxnEYaVQUj

I have a massive gut feeling KP is going to own this IPL. #MIvsRPS

Pitch assisted pacers as well as spinners today. When was the last time we had such a pitch in India #MIvRPS

That’s a half century for the ever consistent #Rahane. What a player! #MIvRPS #DumKaNayaRang — Pune Supergiants (@RPSupergiants) April 9, 2016

To maintain consistency, Dhoni should enter #IPL2016 semi finals & then should lose to the eventual winners #MIvRPS

What good is Shreyas Gopal as a left arm spinner if he can’t get KP out on the first ball#MIvRPS — Gaurav Sethi (@BoredCricket) April 9, 2016

The Turbanator is brought on now. Will he spin a web around RPS? #DilSeIndian #MIvRPS

Where Are People Hiding Who Said Rahane Is A Test Match Player? 😉#MIvRPS #RPSvsMI #IPL9 #IPL

This McClenaghan always looks like he just quit his job at The Wall, after killing Jon Snow. #MIvRPS — Sorabh Pant (@hankypanty) April 9, 2016

This is some debut for #RisingPuneSupergiants. Worth studying the slow #MI starts — Harsha Bhogle (@bhogleharsha) April 9, 2016

The last time I had seen Mumbaikars so stunned was when they realized the Bandra Worli Sealink was not a practical joke. #MIvsRPS — Antinational Bajirao (@bizzarebhide) April 9, 2016

What’s the point of having Ricky Thomas Ponting as coach if mumbai indians’ bowlers can’t even sledge the batsmen — one tip one hand (@OneTipOneHand_) April 9, 2016

Chaos in the field! Could’ve been a run-out! What are the Mumbai Indians doing here?! #IPL #MIvRPS — HoldingWilleyCricket (@holdingwilley) April 9, 2016

Looks like an early finish at the Wankhede tonite. Rahane relishing playing on home track. Mumbai looked 25-30 short to me to start with — Cricketwallah (@cricketwallah) April 9, 2016

Rahane and Faf du Plesis walk out to the crease for #RPS with M McClenaghan opening the attack for #MI. The chase is on. #MIvRPS — KolkataKnightRiders (@KKRiders) April 9, 2016

FOUR, Bhajji finishes off in style. MI put up 122 runs on the board. Cricket pundits say this is a fighting total. — https://t.co/KcE2MFJNpD — CricketCountry (@cricket_country) April 9, 2016

Well played, Harbhajan Singh…has given himself some runs to put up a fight. Need 2-3 wickets in the powerplay to make a match #MIvRPS #IPL — Aakash Chopra (@cricketaakash) April 9, 2016

Be ready for jokes on Harbhajan’s improved performance after his marriage! LOL — Bhaiyyaji (@bhaiyyajispeaks) April 9, 2016

Ishant Sharma is upset that why Harbhajan didn’t hit six sixes in my over #IPL2016 #MIvsRPS — Akshay (@ComedyBanda) April 9, 2016

After that excitement, Im going to heat myself up a bowl of soup…. #Winning #IPL — Innocent Bystander (@InnoBystander) April 9, 2016

The only reason RP Singh played was that his initials are the same as the franchise – RPS#RPSvsMI #IPL2016 — Gaurav Sethi (@BoredCricket) April 9, 2016

Harbhajan singh is Better All Rounder than Jadeja TBH But Jaddu was In due to CSK Quota, Now Game Over For Him #MIvRPS — Lolwale (@sabkilengayab) April 9, 2016

Stephen Fleming looks quite relaxed! And why not, his team is cruising! #IPL #MIvRPS — HoldingWilleyCricket (@holdingwilley) April 9, 2016

So Ravichandran, what does it feel like to not be the best Ashwin in the team#RPSvsMI #IPL2016 — Gaurav Sethi (@BoredCricket) April 9, 2016

Just spotted a Mumbai Indian player in the middle of all the sponsors. — Trendulkar (@Trendulkar) April 9, 2016

And Ravichandran Ashwin gets a wicket off his first delivery; fourth such instance in this match!https://t.co/6hLXsibSGX#MIvRPS #IPL2016 — CricLife (@TheCriclife) April 9, 2016

No Ravichandran Ashwin bowling as yet. Dhoni still pissed with him for some reason?#MIvRPS — Amit Banerjee (@akb287) April 9, 2016

This is the first instance in @IPL history of three bowlers taking a wicket with their first ball in an innings. pic.twitter.com/mQpKygcaNi — Cricketopia.com (@Cricketopia) April 9, 2016

Too many expectations being heaped on Pandya. He’s not a No.3 batsman; we run the risk of damaging his career by over-exerting him. #MIvsRPS — Mohammad Kaif (@KaifSays) April 9, 2016

2000 #IPL runs for Ambati Rayudu. All of them for #MI. Only Sachin Tendulkar and Rohit Sharma scored more than Rayudu for MI. #MIvRPSG — Sampath (@SAMPATHB24) April 9, 2016

Why would @mipaltan make such a track and then misread it ? A team full of flat track bullies shouldn’t be doing that #MIvRPS — Cricket Bakchod (@AllTimeBakchod) April 9, 2016

The only way MI can reach a good total, If there supporting staff replace their lower batting order. #MIvRPS — Silly Point (@Sarcaism_) April 9, 2016

Rajat Bhatia gets Kieron Pollard with 1st ball. Anyways he should have been out in the previous overhttps://t.co/6hLXsibSGX#MIvsRPS — CricLife (@TheCriclife) April 9, 2016

The IPL fonts are designed by Taher Shah because it’s hurting the eye. — Trendulkar (@Trendulkar) April 9, 2016

Either Mumbai Indians are not applying themselves well or Rising Pune Supergiants have overdosed on Dryfruit Mastani from Sujata. #VIVOIPL — Antinational Bajirao (@bizzarebhide) April 9, 2016

Indians yet again trouble at Mumbai but not under Dhoni though… — Broken Cricket (@BrokenCricket) April 9, 2016

Ambulance is parked outside stadium cos Navjot Singh Siddhu will straight away go to hospital after match. — Barkhurdaar (@BloodyKamina) April 9, 2016

This is fast resembling the MI of old, all they need is Rahane on the bench#IPL2016 — Gaurav Sethi (@BoredCricket) April 9, 2016

If Ishant Sharma continues bowling like this, one day he can become Joginder Sharma. #MIvsRPS — Silly Point (@Sarcaism_) April 9, 2016

Simmons hoping against hope for the Umpire to signal a no-ball once again! Not this time mate. #MIvRPS #IPL2016 #IPL9 — Chinmay Jawalekar (@CricfreakTweets) April 9, 2016

Graphics for IPL are straight out of a shitty sci-fi movie like Krrish series. — dorku (@Dorkstar) April 9, 2016

Few weeks before there was pin drop silence for similar shot by Simmons at this same venue… — Broken Cricket (@BrokenCricket) April 9, 2016

ishant u r no more my student. getting wic is crime for my students. #MIvRPS #EkIndiaHappywala #IPL4DroughtVictims — Sir Ashish Nehra (@Guru_A_Nehra) April 9, 2016

Good start by Ishant. Pitching it up, moving it around. Odd wide ok because he’s in rhythm — Harsha Bhogle (@bhogleharsha) April 9, 2016

The @mipaltan are warming-up ahead of the season’s opener #IPL – @ImRo45 @josbuttlerhttps://t.co/BK3VWUTUvV — IndianPremierLeague (@IPL) April 9, 2016 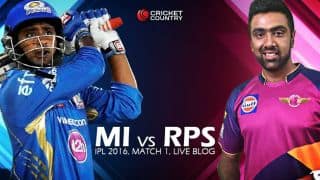 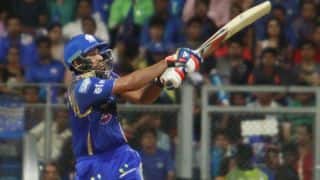