Get the live updates, most hilarious tweets and lot more on match No. 49 of IPL 2016 between Rising Pune Supergiants and Delhi Daredevils here.

Rising Pune Supergiants (RPS) are out of the IPL 9 but they have plenty of pride to play for and in process may end up spoiling many parties. Delhi Daredevils (DD) have been a much improved side this season but they have chosen a wrong time to wobble, losing three of their last five games.

The berth for play-off spot is getting intense with Sunrisers Hyderabad (SRH) already qualified and five teams vying for the three remaining spots. DD have been bold with their selection but perhaps they have experimented too much. Two wins is all they need and that should seal it for them but the wounded MS Dhoni led Pune side won’t let it easy.

They maybe languishing at the bottom of the table but they will hope to end their campaign at a slightly better spot. Dhoni has won the toss and elected to field first. He has made one change for this game as Deepak Chahar makes his IPL debut replacing Murugan Ashwin while DD have made as many as three changes with Shreyas Iyer, Mohammad Shami and Nathan Coulter-Nile coming in for Mayank Agarwal, Shahbaz Nadeem and Imran Tahir.

Even though Bailey got his helmet knocked off, he's still smiling! What is with this guy?#IPL #RPSvDD

IrfanPathanmust be feeling like Bhurafrom Lagaan, he sacrifice his wicket for his captain MS Dhoni.#KKRvRPS

Most stumpings in IPL:

Sunny Gavaskarwould have made a great marriage broker. He always talks about converting singles into couples #RPSvDD

Now a strategic time out for alcohol… #ipl

No. of uncapped Indians under Dhoniin IPL: (Season wise)

What am I seeing
Dhonigives Irfanthe ball..
Thought he was there just to make up for the numbers.. #IPL2016 #RPSvDD

Why the fuck had I behaved like a good bowler this season? Something is fishy #RPSvDD

I Was Alive When Ashok DindaBowled A Wicket Maiden Over . 😉#RPSvDD #IPL2016 #IPL9 #IPL

Delhi Daredevils have made 30 changes in 12 games!
5 changes every 2 games is far too much#RPSvDD #IPL2016 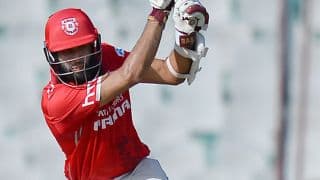