Get the live updates, most hilarious tweets and lot more on match No. 6 of IPL 2016 between Gujarat Lions and Rising Pune Supergiants here.

The Indian Premier League (IPL) season 9 bandwagon reaches Rajkot, as the city prepares itself to host its first-ever IPL game. Home to the Gujarat Lions (GL), the first franchise from the western state of India, the city will play host to the two newest members of IPL family when GL take on Rising Pune Supergiants (RPS).

It will be an emotional moment not just for the cricket fans from the city, but also for the players as the core of both these teams comprises of players from the banned franchises Chennai Super Kings (CSK) and Rajasthan Royals (RR). While CSK skipper MS Dhoni will be leading RPS, his deputy at the erstwhile franchise Suresh Raina will be leading GL.

Apart from these two players, there are quite a few other prominent names who will be turning out in new colors. Both these teams had a winning start to their maiden IPL and it will be interesting to see which side blinks first tonight. The match will begin at 8 PM and is expected to be the top trend on social media. As always, we will bring you the best of the social feeds, including some hilarious tweets, from the match in this space. Enjoy the game with our presentation.

Commentator: What Went Wrong?
Dhoni: Almost Forgot We Have @SirIshantSharma In Team. We Were 120 Runs Short#GLvRPS #RPSvGL #IPL9 #IPL2016

MS Dhoniwhen he realised that he has to captain this bowling side against RCB at Bangalore #GLvRPS pic.twitter.com/1bnPk310rB

Have batsmen started playing Rajat Bhatia as a slow bowler? If so, will be an interesting challenge for a fine but under-rated bowler

B for ball , c for catch thola @DineshKarthik

That Awkward Moment When #SirJadeja Is Bowling Faster Than @SirIshantSharma .

Strange that Gujarat named their IPL team mascot after a non-vegetarian.

Bravo after wicket jig gives the iplmore credibility than anything else.#GLvRPS

Hey KP interested in Patel and sons sponsorship for bat ?

Only Doull, Bishop and Styrisare better current commentators than Harshain the IPL.

For everyone : VIVO
For Rameez Raza: YVO 😉#VIVOIPL2016 #GLvRPS

Welcome to the IPL, a competition where we’re not allowed to watch any Pakistani players but we’re forced to listen to Ramiz Raja.

Good length and breadth of the ground – RameezRaja. #IPL pic.twitter.com/W9TZBcEaqM

What a shot from @KP24! An on-drive against the turn off Jakati. Can’t believe this man doesn’t play international cricket. #GLvRPS #IPL9

Still can’t quite believe that Rameez Raja gets a contract but Harsha Bhogle doesn’t. #GLvRPS

Looks like the officials do monitor the social media reactions. The font in the scoring graphics has been changed. #IPL

Looks like both Wimbledon and the French Open is going to be played on the #rajkot pitch.#IPL #GLvRPS #IPL9 #ipl2016 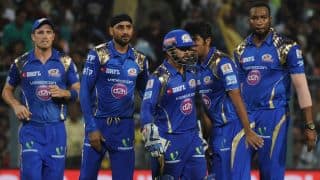