The Indian Premier League (IPL) has been one of most successful T20 tournaments across the globe, producing nine champions in its editions so far. The tournament may have been unpredictable, but one thing is guaranteed for sure every season. It gives us plenty of memorable moments to cherish, that take place during its course. Abhishek Kumar lists out the 10 most memorable moments form IPL 9 in the part II of the two-part series.

It was a brilliant effort by the Australian all rounder at the deep mid-wicket in the 14th over of the first innings of the match. It was not very well timed by Aaron Finch to bowler Barinder Sran’s delivery but it had the distance to clear the ropes. Cutting at the boundary line, leapt and stretched to catch the ball in the air but was beyond the ropes, while he caught it. He showed great presence of mind and skills as he threw the ball inside and saved five runs for Sunrisers Hyderabad (SRH). Probably, that was the best fielding moment of the tournament.

2.  Harbhajan Singh and Ambati Rayudu almost got into an on-field fight

It was one of the ugly moments of the tournament but thanks to Harbhajan Singh who controlled the heat of the moment and did not let it further extend. Though it was among the ugliest moments of the tournament but it will still be remembered as memorable moment because of Harbhajan’s presence of mind as he did not take things far and calmed down his teammate Ambati Rayudu. Both the players almost charged at each other and Harbhajan being the senior player handled the situation but Rayudu was in no mood for peace and angrily walked away.

It was the 54th game of IPL 2016, played between Mumbai Indians (MI) and Gujarat Lions (GL) but it looked more off a contest between two brothers’ teams from the same nation. It’s a known fact that West Indies’ cricketers have a habit of making the game interesting with their unusual behaviour, especially when it’s an IPL match. It was a friendly gesture between these two players, when Bravo ran towards pollard after his follow through and gave a little push to Pollard. It was nothing serious but Bravo got fined for that and both the cricketers clarified on Twitter as well that there was nothing to be fined.

It’s slowly turning into a robotic game.. No emotions no actions nothing …2020 = entertainment !! Rigorous battles !! Evrything is a fine

Calm down everybody. @KieronPollard55 and I are best friends on and off the field. Pity that normal banter is being shaped to suit agendas.

It was an historical moment for the fans of Kanpur as for the first time, an IPL match was being played at this venue and to add more joy, Apple CEO Tim Cook was invited there. He was watching the game alongside IPL chairman Rajiv Shukla and Bollywood actors Sanjay Dutt. It was very hot but nothing stopped the top honcho from coming there and Cook called it an incredible experience of his life.

It was not the first time when Kolkata Knight Riders (KKR) captain Gautam Gambhir had set that kind of field for MS Dhoni. He has been doing that since last one year and this type of field setting is usually seen during Tests. It was surely one of the most memorable moments of the tournament.

6.  When Bravo and Dhoni almost collided

Bravo and Dhoni are known to be very good friends and both used to represent the same team for a long time in IPL till last year. This year, both the players were in different sides and there was a moment when Bravo showed his friendly gesture to his old friend which looked like something is heating up but nothing came out of it.

It was probably one of the most iconic moments of the tournament when umpire Bruce Oxenford entered the field with an armguard shield in order to protect his left hand from getting hit. Fans on social media started making funny memes and GIFs on his armguard and compared it with Hollywood superhero Captain America’s shield. Oxenford kept doing that for every match whenever he walked in for umpiring.

Mustafizur was excellent with his bowling throughout the tournament for SRH.  During the match between SRH and KKR, he bowled another gem of a delivery by dismissing big hitter Andre Russell with his unplayable yorker. Russell tried his best to block it but could not and slipped on the pitch. It reminded fans of Waqar Younis’ yorker to Brian Lara.

It was a heart breaking moment for all Royal Challengers Bangalore (RCB) fans when their loss in final looked imminent. It was their third final in IPL history which they lost as their search for the title continued. This was their best chance to win the tournament as they had an excellent start by skipper Virat Kohli and opener Chris Gayle while chasing a big total of 209 against SRH. But in between, wickets started falling and eventually they lost the match. Sachin Baby, part of RCB team was at the crease at that time could not control his emotions and tears started coming from his eyes. Not only him, few other RCB players in the dugout also almost cried.

10.  When David Warner helped Chris Gayle off the ground:

Warner and Gayle are both aggressive left hand batters and always perform well in IPL. It was the grand finale of IPL 2016 and if Gayle is there, then there has to be entertainment. It was the fifth ball of the second over of the match, bowled by Gayle but he failed to grab a return catch from Shikhar Dhawan and fell on the ground and probably hurt his fingers as well. Warner at the non-striker end reacted very maturely and helped him off the ground and made the final look more memorable than intense. 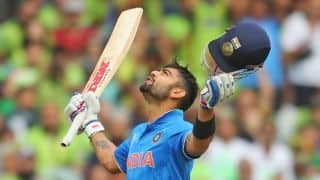 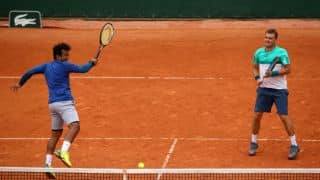