IPL 2016, Qualifier 2, Pick of the tweets: Gujarat Lions vs Sunrisers Hyderabad at Delhi

IPL 2016, Qualifier 2, Pick of the tweets: Gujarat Lions vs Sunrisers Hyderabad at Delhi

Get the live updates, most hilarious tweets and lot more from Qualifier 2 of IPL 2016 between GL and SRH here.

Gujarat Lions (GL) will battle it out with Surisers Hyderabad (SRH) in the Qualifier 2 of the Indian Premier League at Feroz Shah Kotla Stadium, Delhi on Friday. It’s a do-or-die game for both the teams as the winner will progress to the final of the tournament.

GL suffered a dramatic defeat in the Qualifier 1 at the hands of Royal Challengers Bangalore and now have a crucial game ahead of them. Brendon McCullum and Aaron Finch at the top have the tendency to rip apart any bowling attack but haven’t clicked in the last two games. GL will hope them to fire and lay a solid platform at the top. LIVE Streaming IPL 2016, Qualifier 2: Watch Free Live Telecast of Gujarat Lions vs Sunrisers Hyderabad

SRH on the other hand will bank on their bowlers and skipper David Warner. Yuvraj Singh has been in good form and if he gets going, he can the turn the game on its head. The pitch at Delhi will play a massive role and both the teams will come out all guns blazing to emerge victorious.

Expect a run-fest at Delhi as both the teams have nothing to lose and the game will be an enthralling one. The clash of the two feisty left-handers is about to begin, stay tuned in this space to enjoy live updates and the best tweets from the cyberspace.

WELL WORTH NO SLEEP!! What a win @SunRisers !!! Can’t believe it!!! #OrangeArmy #OrangeVoice

Seriously special innings from Warner. Think he is growing with the responsibility of holding this team.

Even cheerleaders are now under pressure to perform. Preparing to cry if their team looses #GLvSRH

I think Praveen Kumar didn’t know what David Warner did to Ishant Sharma when he sledged Warner in Perth Test… — Broken Cricket (@BrokenCricket) May 27, 2016

Not everyone can do an Iqbal Abdulla! Naman Ojha heads back to the dugout!#IPL #GLvSRH — HoldingWilleyCricket (@holdingwilley) May 27, 2016

That Lollipop Moment Whn D Smith is Treated Like as an Allrounder & R Jadeja is not even considered as a Bowler.#GLvSRH#SRHvsGL #IPL — Sir Rohit Sharma (@SirRohitSharma0) May 27, 2016

Batsmen adjust screen while batting… Shivil Kaushik Adjust Mid off fielder so that he can see batsman through the fielders eyes #GLvSRH — Oye..Guru.. (@gururaj187in) May 27, 2016

Hodge icy cool as coach too, won’t find too many saying they’d like to win by the tiniest of margins.#GLvSRH — Gaurav Sethi (@BoredCricket) May 27, 2016

“If Gujarat Lions loses this match than fireworks will begin in Pakistan” : Amit Shah. #GLvSRH — Smoking Skills (@SmokingSkills_) May 27, 2016

Shivil Kaushik is bowling ‘Weirdest’ bowling action in IPL history. But still he is getting the wickets. _/\_#GLvSRH — Dinu (ദിനു) (@Dinoop_nair) May 27, 2016

I think Shivil Kaushik has missed his run-up ahead of his first ball in every game he has played in #GLvSRH — Arun Venugopal (@scarletrun) May 27, 2016

Big games need big players to come good…#SRH has their two biggest players in the middle. Making of a thriller… #GLvSRH — Aakash Chopra (@cricketaakash) May 27, 2016

Henriques is actually turning out to be a good support to Warner at no.3! One decision that might actually have worked!#IPL #GLvSRH — HoldingWilleyCricket (@holdingwilley) May 27, 2016

David Warner 4th batsman to aggregate 700+ in an #IPL season (Chris Gayle has done it twice!)#GLvSRH — Mohandas Menon (@mohanstatsman) May 27, 2016

Shikhar Dhawan Gone.. Commentator-“Great start by SRH” Everyone knows how a big asset he is..Argh…sorry..for the opposing team..#GLvSRH — The LuNatic FriNge (@imsinha15) May 27, 2016

Need warner’s wicket then whole SRH’s batting line up will be back to the dugout #GLvSRH — Jaanvi. (@TrueViratian) May 27, 2016

As a team, #SRH is more boring than an intellectual Bengali movie#GLvSRH — Sunil (@akshaykanitkar) May 27, 2016

As a team, #SRH is more boring than an intellectual Bengali movie#GLvSRH — Sunil (@akshaykanitkar) May 27, 2016

Bhuvi makes the job of any captain easy with his bowling performances!#IPL #GLvSRH — HoldingWilleyCricket (@holdingwilley) May 27, 2016

Great how everybody’s doing their best to keep Jadeja off strike.#GLvSRH — Gaurav Sethi (@BoredCricket) May 27, 2016

That piece of cricket from Ben Cutting was quite unbelievable. Fielding rising to new heights. Saved 4 — Harsha Bhogle (@bhogleharsha) May 27, 2016

5 batsmen have scored 300+ runs for @TheGujaratLions in this IPL. No other team has more than 3 such batsmen. Balanced. #GLvSRH — Bharath Seervi (@SeerviBharath) May 27, 2016

That was one of the best DROPPED I ever seen in Cricket… — Broken Cricket (@BrokenCricket) May 27, 2016

Keshav Bansal is another cheerleader of GL,dances of every four and six irrespective of where the game is#IPL #IPL2016 #SRHvsGL #GLvSRH — Tabrez Shaikh (@its_tabrez_4u) May 27, 2016

Keshav Bansal is jumping with joy. He is the new face of the Cricket Enthusiasts bandwagon!#IPL #GLvSRH — HoldingWilleyCricket (@holdingwilley) May 27, 2016

McCullum unusually sedate. Something in this pitch for bowlers. Gujarat will be looking for 150 at least still… — Cricketwallah (@cricketwallah) May 27, 2016

RCB fans currently! They don’t care who they’ll be facing in the finals!pic.twitter.com/wb7HsKMp9r#IPL #GLvSRH — HoldingWilleyCricket (@holdingwilley) May 27, 2016

That BossDK brainfade can’t be far, he’s looking too good to be true. What will it be reverse sweep or Dilscoop?#GLvSRH — Gaurav Sethi (@BoredCricket) May 27, 2016

There is a New Hairstyle in The Fashion World Now….Called “Ben Cutting”#GLvSRH#SRHvsGL #IPL #IPL2016 — Sir Rohit Sharma (@SirRohitSharma0) May 27, 2016

Difficult to decide if Rameez Raja is a better speaker (read commentator) than Ashutosh#GLvSRH — Sunil (@akshaykanitkar) May 27, 2016

Telephone operators can use Siddhu to advertise their UNLIMITED TALK TIME packages.#SRHvGL #GLvSRH — Krutika. (@kruti101) May 27, 2016

This is the perfect day for Dinesh Karthik to showcase his skills as a keeper batsman of Gujarat Lions.#GLvSRH #IPL2016 — Umang Pabari (@UPabari) May 27, 2016

After that 4 wicket haul, GL has started considering Dr. Smith as a bowler,it seems!Comes too lower down the order to make an impact!#GLvSRH — HoldingWilleyCricket (@holdingwilley) May 27, 2016

Dinesh Karthik is playing his 199th T20 match and Bhuvneshwar his 99th. Only one of them will reach the milestone in the final on 29th. — Bharath Seervi (@SeerviBharath) May 27, 2016

Last time Suresh Raina got out for single digits in 2 consecutive innings in IPL in India was in 2013. #GLvSRH — Bharath Seervi (@SeerviBharath) May 27, 2016

You Just Can’t Underestimate The Power Of #SRH bowling Line Up. Looks Like Raina Is back In the Form#GLvSRH#SRHvsGL #IPL #IPL2016 — Sir Rohit Sharma (@SirRohitSharma0) May 27, 2016

The dominant batting of Lions against the mighty bowling of SRH is like a Lion and Elephant clash-A TREAT! #GLvSRH pic.twitter.com/WJ10TEsLNH — Leverage Cricket (@LeverageCricket) May 27, 2016

IPL is NREGA equivalent for cricketers like Dinesh Karthik and Praveen Kumar #GLvSRH — Guxaani (@NeelakshiGswm) May 27, 2016

SRH’s wicketkeeper Naman Ojha needs 2 more dismissals to break the record for most dismissals by a wicketkeeper in an #IPL season! #GLvSRH — HoldingWilleyCricket (@holdingwilley) May 27, 2016

Trent Boult is in playing for injured Mustafizur#GLvSRH — Sarang Bhalerao (@bhaleraosarang) May 27, 2016

.@TheGujaratLions boys are out in the middle and warming-up for Qualifier 2 #GLvSRH #VIVOIPLhttps://t.co/rR0GNiiYWU — IndianPremierLeague (@IPL) May 27, 2016

IPL keeps you till edge of the seat. Tough match. Best teams fighting for finals. May the best team reaches to finals #Eit20 #GLvSRH — Supratim Lahiri (@LahiriSupratim) May 27, 2016

This is how the pitch looks like for Q2- @TheGujaratLions v @SunRisers pic.twitter.com/tyIDDvgaGg — IndianPremierLeague (@IPL) May 27, 2016 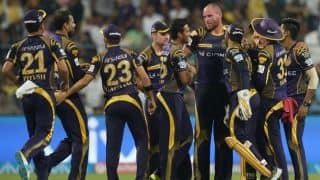