Virat Kohli-led Royal Challengers Bangalore became the first team to reach the finals of the ninth edition of Indian Premier League (IPL) by beating Suresh Raina-led Gujarat Lions (GL) by 4 wickets at Bengaluru. For the first time, Kohli got out on duck in this season, and it was a day when crowd witnessed AB de Villiers’ masterclass taking his side to victory.

RCB won the toss and continuing the current trend, Kohli invited GL to bat first on Bengaluru’s belter of a track. Unexpectedly, it offered some turn and RCB bowlers made full use of it by sending Aaron Finch, Brendon McCullum and their skipper Raina back to the dug out, as GL were 3 for 9. Thanks to Dinesh Karthik and Dwayne Smith, who collected 85 runs between them and brought their side back into the competition. After the departure of these players, RCB put a lid on the runs and bundled out GL for 158. Other than Smith and Karthik, no other batsman could reach 20-run mark (in fact, seven of them were unable to go past even 10). RCB spinner Iqbal Abdullah bowled exceptionally along with Shane Watson and Chris Jordan, but their star leggie Yuzvendra Chahal failed this time as he went to concede most number of runs.

Coming to chase, RCB were once again highly dependent on their skipper Kohli; but this time, he failed and got out without disturbing the scoreboard. Following his wicket, opener Chris Gayle along with KL Rahul, Shane Watson and Sachin Baby, were dismissed in quick succession. It was pacer Dhawal Kulkarni‘s exceptional four-for that put GL in a commanding position. But then Stuart Binny joined de Villiers and revived RCB’s hopes of reaching the final. Once Binny departed, spinner Abdullah came to the crease and  did what was expected from other batsman, as he batted till the end with de Villiers, who scored an amazing 47-ball 79. Abdullah and de Villiers added 91 runs together in 52 balls and ensured RCB’s berth in the final of IPL 2016. Except Dhawal Kulkarni and Ravindra Jadeja, rest of the bowlers were on the expensive side; especially Shadab Jakati, who leaked 45 runs in his 4 overs.

Turning Point: GL skipper Raina asked Jakati to bowl the 16th over, who was quite expensive in his firs spell of two overs and once again he went for the same, conceding 16 from that over(when RCB needed 49 from 30 balls). Had Raina gone with some other bowler, there would have been some chances for him to revive the result in his side’s favour and that proved to be the turning point of the match. 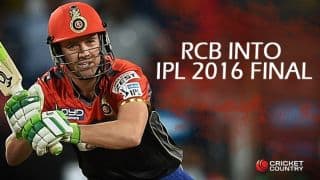