David Warner led Sunrisers Hyderabad defeated Gautam Gambhir led Kolkata Knight Riders in a thrilling eliminator of the ninth edition of Indian Premier League by 22 runs at Delhi. This win ensures SRH’s hope of playing in the final with one match to go, which they will play against Gujarat Lions in the second qualifier game at the same venue.

After winning the toss, KKR invited SRH to bat first at the Delhi track with some grass on it. Skipper Warner and Shikhar Dhawan once again had a poor start, with their team losing their first wicket in the second over of the game but they became the first opening pair in IPL history to score go past  1500 runs together. Dhawan’s wicket was once again taken by Morne Morkel that he has been doing since ICC Cricket World Cup 2015. After the first wicket, Moises Henriques and Warner batted pretty sensibly but soon both of them got out in consecutive deliveries of chinaman Kuldeep Yadav in the 10th over. Further, southpaw Yuvraj Singh came into action and looked very comfortable as he went on to score 30-ball 44 and in this course, he completed his 4000 T20 runs and also there was a foolish run out was witnessed of Deepak Hooda. Following this, Ben Cutting and Naman Ojha too departed but thanks to Bipul Sharma’s short cameo in the final over of the first innings where he hit two sixes to Morkel and ensured a defend able total of 162 with the loss of eight wickets. Read: IPL 2016, Eliminator, Pick of the tweets: Sunrisers Hyderabad vs Kolkata Knight Riders

Coming to KKR’s batting, they too lost their opener Robin Uthappa’s wicket in the second over. Gambhir and Colin Munro added 52 runs between them for the second wicket but an excellent throw by Yuvraj made the Kiwi all-rounder depart. Later, Gambhir too departed after scoring a run a ball 28 and his wicket followed the man in form — Yusuf Pathan too. Manish Pandey and Suryakumar Yadav both were new to the crease and started building a partnership but a good catch by Dhawan spoiled his inning and Henriques took his second wicket of the match. From there on, wickets kept falling as Pandey too departed and KKR lost the plot.

Turning Point: Warner asked Henriques to bowl the 16th over of the game (when KKR needed 53 from 24 balls), where he conceded only six runs with a crucial wicket of Suryakumar Yadav who was batting well along with Manish Pandey. With this partnership breaking wicket, KKR started losing their hold from the match and soon Pandey too got out and all the hopes for their side were almost dead. 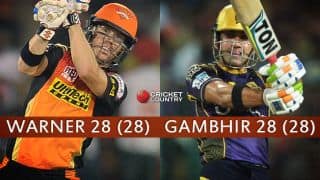