Javed Miandad, born on June 12, 1957, is one of the greatest cricketers to have played for Pakistan.

Javed Miandad, born on June 12, 1957, is one of the greatest cricketers and possibly the best batsman to have played for Pakistan. He remained their leading run-scorer in Test cricket with 8,832 runs in 124 Tests at an average of 52.57 before Younis Khan broke his record and went on to become the first Pakistani batsman to cross the 10,000-run mark in Tests. Nishad Pai Vaidya picks 20 facts to know about Miandad.

Miandad s parents used to live in Gujarat in the pre-partition days. They moved to Karachi, the commercial capital of Pakistan, in 1947. His father used to work for the police while in what is modern-day Gujarat. Miandad is one of seven siblings.

The book The Unquiet Ones: A History of Pakistan Cricket notes that Miandad s father had worked for the Karachi Cricket Association. As a result, Miandad was exposed to the company of some of the best players in Pakistan at the time. So passionate was the young boy about the sport that he agreed to field in matches played by senior men at the Muslim Gymkhana. As a reward, he would be paid Rs 50.

3. Making a mark at a young age

In 1973, Miandad made his First-Class debut for Karachi Whites against Pakistan Customs in a Board of Control for Cricket in Pakistan (BCCP) Patron s Trophy. The 16-year-old Miandad announced himself in style, scoring a 50 in his very first innings.

4. A stellar season and a triple ton earns a Pakistan call-up

Miandad had represented various Pakistani representative sides through 1974-75. However, once he amassed 947 runs in 12 matches at an average of 47.35 with four tons in the First-Class season, it was difficult to ignore him for higher honours. In the Kardar Summer Shield final of 1975, he hit 311, which remains his highest First-Class score. That helped him go to England for the first ever World Cup.

Miandad made his international debut for Pakistan a few days short of his 18th birthday. Although he had moderate success, it was clear that he was the one to watch out for. Wisden notes that Sadiq Mohammad suggested Miandad to Tony Grieg. As a result, Miandad played three matches for the Sussex Second XI later that year. In his very first game, he smashed 227, opening the batting with Peter Kirsten, who scored 108.

In his younger days, Miandad used to bowl quite regularly. His leg-spin formed a crucial component of his cricketing acumen. In his first international outing, he was trusted with a few overs. His first international wicket was of the great Clive Lloyd. As the years went by, Miandad s leg-spin became an occasional occurrence with his batting taking precedence. However, he has six five-wicket hauls in First-Class cricket.

7. Brothers-in-arms and the cricketing nephew

Miandad had three other brothers who also played First-Class cricket. Bashir, Anwar and Sohail represented Karachi and a few other sides. Bashir played only five matches, while Anwar went on to appear in 141. The youngest, Sohail, played 62 First-Class games. Apart from that, Miandad s nephew, Faisal Iqbal has also played Test cricket for Pakistan.

8. Youngest man to score a double ton in Test cricket

Having made an impression in England, Miandad made his Test debut in 1976 against the touring New Zealand side. On debut, he hit 163 and 25 not out. In his third Test, he created history as he hit 206 in the first innings to become Test cricket s youngest double centurion at the age of 19. He went past George Headley, who had scored one at the age of 20. Miandad s record stands till date.

9. Average over 50 throughout Test career

Miandad maintained an average over 50 throughout his Test career, only the second batsman to achieve the feat. England’s Herbert Sutcliffe is the other man. It is quite remarkable for a man who has played 124 Tests. It is a mark of great consistency and dominance.

Miandad was known as the street fighter for his chirpy behaviour on the field. He not only fought with the bat, but was also infamous for his verbal volleys. The most famous incident is the one involving Dennis Lillee in Perth, where Miandad was seen trying to threaten the Aussie pacer with the bat. The umpire had to stand between the two. The Indians in particular, would remember the numerous contests they had with him, where he did not back down verbally. In a famous incident, he asked for spinner Dilip Doshi s room number, so that he could send the ball there. Then he also mimicked Kiran More s over-appealing in the 1992 World Cup encounter.

For most people, cricket is a sport, but for Miandad it was a bigger deal. He was on the field to win as it was a mission for him. As far as I was concerned, cricket was war and I was at war whenever I played, Miandad wrote in his autobiography Cutting Edge My Autobiography. His numerous memorable encounters against India are documented in a chapter called Wars with India.

Miandad was only 22 years old when he first captained Pakistan in Test cricket. That made him the youngest captain for Pakistan until Waqar Younis, who was only 21 when he led them in 1993.

With four runs to win off the last ball against arch-rivals India in the 1986 Austral-Asia Cup final in Sharjah, Miandad carted a full-toss from Chetan Sharma for a six to win a historic game. That six is considered one of the defining moments in the India-Pakistan rivalry as the former found it tough to beat their biggest rivals in the years ahead. Kamran Abassi, wrote in the British Medical Journal, in a paper titled India versus Pakistan and the power of a six: an analysis of cricket results, Overall, Pakistan has achieved greater success in both forms of the game. These data suggest that in one-day matches Miandad’s six inspired an improvement in Pakistan’s performance or a decline in India’s, or both, but this effect was small in Test cricket. The six is a part of cricketing folklore. Miandad reaped rich rewards. He was promoted at Habib Bank, the corporate he represented in domestic cricket. He was gifted a Mercedes. It is also said he was given a diamond bracelet, which was valued at US $80,000. Not only that, the Pakistan government also recognised his feat and bestowed upon him the Pride of Performance.

14. The declaration that caused heartburn

In a Test match against India at Hyderabad in 1983, Miandad made his way to 238 at the end of Day Two. The next day, he moved to 280 not out and Imran Khan, the skipper declared. Miandad was not happy with that declaration as he believed he could get the triple century and perhaps a lot more. He claims that no declaration plans were shared with him. This remains one episode in the said Miandad-Imran rift that lasted through their careers.

Some Pakistan corporate such as Pakistan International Airlines (PIA) etc started their cricket teams to compete in domestic cricket. Miandad represented Habib Bank from a young age. As discussed earlier, he was promoted in the bank after that six against India. Later, he went on to become a vice-president of the bank.

Miandad almost did not make the tip Down Under for the 1992 World Cup. However, he finished as one of their most successful batsmen as he went on to lift the trophy. In his recent column for the ICC ahead of the 2015 World Cup, he recalled, It was a fairy-tale event for me. There was a big question mark on my participation due to a stomach infection and troubled back. I arrived just a couple of days before the tournament started and carried throughout the tournament. It was worth playing with pain as I contributed to the team s cause by scoring five half-centuries, including in the semi-final and final. Imran and Miandad were said to have a frosty relationship through their careers. However, Miandad was one of his most important allies during the World Cup victory. Years later, Miandad was a vocal supporter of Imran Khan s political moves and even appeared at one of his rallies, as reported by The Dawn.

Miandad s son is married to Dawood Ibrahim s daughter. Dawood is allegedly involved in the 1993 Mumbai blasts. This association caused a controversy in India as there were murmurs that Miandad would not be given a visa to the country for visits. In 2013, the Indian government did give him a visa, but he cancelled his trip.

Miandad s knowledge has been used by Pakistan on a few occasions when he has been coach. He was Pakistan Cricket Board s (PCB) Director-General from 2008 to 2014. In 2004, Miandad visited the Shiv Sena leader Bal Thackeray s house in Mumbai. My relationship with the Shiv Sena supremo has always been quite peaceful. Whenever I spoke to the press he would reply to me personally. But I didn’t imagine that he would call me to meet him and take me around his residence with so much warmth and affection, Miandad told Times of India on the occasion of Thackeray s death in 2012. This visit was a controversial one given Shiv Sena s anti-Pakistan posture in politics.

From opening with Tendulkar to playing under Dhoni, it s been a great experience playing the IPL

Hemant Kanitkar: 10 things you need to know about the Maharashtra stalwart 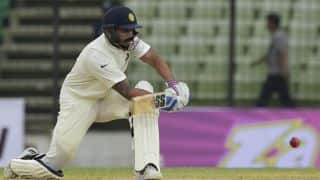