Keen to leave a legacy, Misbah-ul-Haq wants to play till he turns 50

Keen to leave a legacy, Misbah-ul-Haq wants to play till he turns 50

The 42-year old captain, who is already the oldest Test player on the international circuit at the moment, redeemed the lost glory for Pakistan co-incidentally on the country’s Independence Day on August 1.

When Pakistan cricket team left the English shores in 2010, they returned back to their country with their shoulders stooping and heads hanging low. Three of them, including skipper Salman Butt, had just committed a sin by getting involved into spot-fixing. The team’s morale and credibility was at an all time low. Even the most loyal of fans had deserted the side and the future looked bleak. ALSO READ: The day Pakistan became Misbah-ul-Haq.

Then came a messiah in the form of Misbah-ul-Haq. The ageing warrior was brought in with the aim of reviving the side and regaining the lost pride. Six years after that fateful tour, Pakistan did reclaim the honours in the same country when they drew level 2-2 with England in the recently concluded four-match Test series. The leader of the ship was the inspirational Misbah.

The 42-year old captain, who is already the oldest Test player on the international circuit at the moment, redeemed the lost glory for Pakistan co-incidentally on the country’s Independence Day on August 14. And while age is fast leaving his side, the reliable middle-order batsman has no plans to quit the game as yet. As a matter of fact, he wants to create a legacy and go on to play till he turns 50 or may be even beyond. ALSO READ: Is Pakistan’s next generation ready for the challenge?

After the historic series, in an interview with BBC, Misbah said after being asked about his future as a cricketer: “Probably I am ready to (play longer) and we can have a world record when I play till 50.” It is notable here that the record for the oldest Test cricketer is currently with Wilfred Rhodes of England. Rhodes was 52 years 156 days old when he played the last of his 58 Tests against the West Indies at Sabina Park. Besides him, Bert Ironmonger, WG Grace and George Gunn have all played the game after turning 50.

After winning the fourth and final Test against England recently, Misbah had told the reporters that he wants to leave a rich legacy for future Pakistan teams. “When I took over as captain that was my aim, so this win will help me leave a legacy for future Test teams,” the veteran skipper was quoted as saying by AFP. Misbah perhaps hopes to do so by playing till the age of 50. If he can preserve his form and fitness till that long a time, Pakistan cricket team will surely gain a lot from his experience. 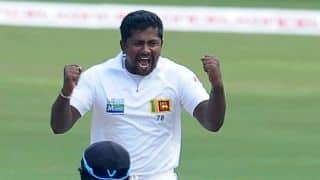