SRH are currently placed in the third position in the points table.

England cricketer Kevin Pietersen, who was expected to play for Sunrisers Hyderabad (SRH) in the later stages of the Indian Premier League (IPL), will not play in the tournament because of calf and Achilles injuries.

The controversial cricketer, after given a snub from English cricket, was due to fly to India on Friday to fulfil his IPL contract. He missed the IPL, as he was playing county cricket for Surrey after being given a lifeline by new England and Wales Cricket Board (ECB) chairman Colin Graves. He was told that he might be considered for national selection if he scored runs in domestic cricket. (READ: Kevin Pietersen may not play for England again despite scoring a career best 326)

Pietersen decided to skip IPL to boost his chance of playing international cricket by opting to play for Surrey. However, earlier this week, he was told he would not be selected for England despite scoring an unbeaten 355 for Surrey against Leicestershire. (READ: Devastated by England snub, Kevin Pietersen set to head to India for IPL 2015)

A report from BBC states that the South Africa-born batsman sustained the injuries during the Country Championship match and is expected to be out for two weeks. In IPL auctions in February, Pietersen was picked for Rs 2 crores by the SRH side, which is being led by Australian opener David Warner. SRH are currently placed in the third position in the points table. The tournament final will be played on May 24. (READ: Kevin Pietersen scores his maiden First-Class triple ton) 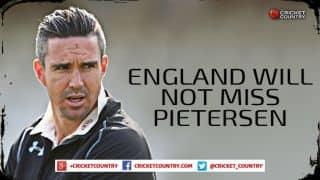 Kevin Pietersen's exclusion from England squad will not make a difference