India the hosts who are one-nil down would look to equalise it and take it to Kolkata, for the decider.

The opener of the much anticipated series between India and South Africa at Dharamsala was a cliff-hanger and all present over there got their money’s worth. Today, the second T20 clash at the Barabati Stadium, Cuttack promises to be nothing less than an electrifying clash. [Pick of the tweets: India vs South Africa, 2nd T20I at Cuttack]

India the hosts who are one-nil down would look to equalise it and take it to Kolkata, for the decider. The Proteas on the other end will look to drive home the advantage and seal a historic series win here at Barabati Stadium.

The first game went right down to the wire, with the backs to the wall JP Duminy came up with the goods when his team needed him the most. India set South Africa 200 for a victory, which was looking advantage India after losing the toss and being sent into bat, first up.

India got off to a solid after an early hiccup in the form of Shikhar Dhawan. Rohit Sharma and Virat Kohli steadies the ship before the former cut loose, hitting sixes at will and the latter playing a perfect second fiddle by rotating the strike. Rohit Sharma top scored with 106 of 79 balls which included five sixes. On completing his ton Rohit became the only second Indian to score hundreds in all three formats after Suresh Raina. Meanwhile after a mini collapse, Mahendra Singh Dhoni winded up the innings with a six of the last ball. De Lange was the most expensive bowler from South Africa going for 47 in four overs.

Hashim Amla and AB de Villiers came out guns blazing and reached 77 in no time before losing the first wicket of Amla. AB de Villiers soon followed and their chase started to look shaky before Duminy took full control of proceedings and seeing the Proteas home with an unbeaten 68 off 34 balls an innings that saw him hit seven sixes and a solitary boundary. With two balls to spare Duminy just pushed a ball to the long and that saw the Proteas go one-up with two to play. Check out the link for the same. 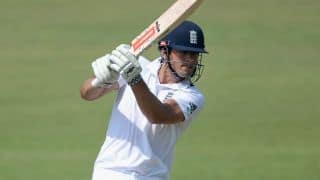