Catch the live action of the final clash of this season’s Big Bash League here.

The final 2016 edition of Big Bash League (BBL) will be played between Sydney Thunder and Melbourne Stars at the iconic Melbourne Cricket Ground (MCG) on Sunday. Both the teams have drilled extremely hard and made it to the finals of the prestigious tournament.

Sydney Thunder registered a fine victory against Adelaide Strikers in the semi-finals as they won the game by eight wickets to sculpt a spot in the finals. Melbourne Stars on the other hand, defeated Perth Scorchers by seven wickets and chiselled their path into the ultimate clash of the season.

One can expect a whole lot of action and drama as both the teams will be looking forward to clinch the title. Thunder skipper Michael Hussey has been instrumental in the season so far and will hope to bid a good farewell as this will be his final appearance as a professional cricketer on Australian soil. They have also included South African star all-rounder Jacques Kallis in the squad for the decider. Melbourne Stars will be hoping their man in form Kevin Pietersen to fore with all guns and carry his team over the line. Expect a run-fest at the MCG. 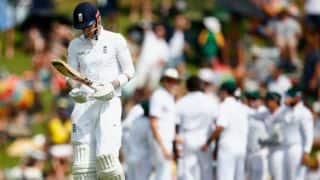