Former India wicketkeeper Nayan Mongia was seen casting his vote during the ongoing Gujarat Assembly Polls. Mongia, who resides in Vadodara’s Akota, was seen visiting the polling booth with wife Tanu Mongia in the early hours of December 14. This is currently the second phase of elections in Gujarat.

Earlier, Cheteshwar Pujara was seen putting his ballot in Rajkot during Phase I of the elections. 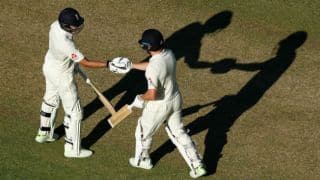