Pranav Dhanawade has been in the news for all the good reasons. He inscribed his name in the history of cricket by scoring an unbeaten knock of 1009 runs in a school game recently, which is the highest individual recorded in any form of cricket. This humongous performance saw him in the limelight and he received accolades from many legends of the game including Sachin Tendulkar.

Dhanawade is the son of an auto-rickshaw driver and created history with his ballistic knock of 1009 in just 327 deliveries while playing for KC Gandhi Higher Secondary School against Arya Gurukul in the Bhandari Cup inter-school tournament organised by the Mumbai Cricket Association on Tuesday. His innings included 129 fours and 59 sixes.

This knock saw him receiving an offer to play for the Air India cricket team. The national carrier’s offer to the young talented cricketer is a part of the airline’s policy of encouraging budding talent in various fields.

An Air India source was quoted saying, “Airline’s policy of encouraging budding talent in various fields. Air India has been promoting young, upcoming talent and has helped shaping up the carriers of many Indian cricketers,” reported by PTI.

However, the scholarship amount which will be paid to Dhanawade was not disclosed. Following this milestone the Maharashtra has also announced that his education and cricket coaching expenses will be bearded by them. 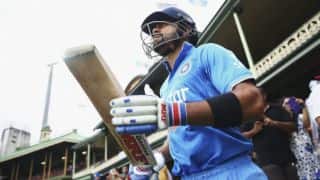