Phelps, the most successful Olympian of all-time, played some cricket with the DC players while the two parties exchanged notes about their own respective sports.

Michael Phelps met with the players of Indian T20 League franchise Delhi Capitals as he attempted to learn the nitty-gritty of cricket, saying he might not have a career in it but he surely enjoyed watching them take on Chennai on Tuesday evening at Feroz Shah Kotla stadium.

Phelps, the most successful Olympian of all-time, played some cricket with the DC players with the two parties exchanging tips about their own respective sports.

“I don t think cricket is my next sport but I loved seeing the match with the Delhi Capitals yesterday,” Phelps said. “It was nice to see how excited the crowd was, and to see how the players shift when there is a change of ends, or a dismissal. I loved watching the sixes yesterday, and definitely today has been about getting a couple of tips from the boys, starting with how to hold a bat. So I m sure I will be better prepared to play cricket when I visit India next.”

Rishabh Pant also shared a light moment with the swimming legend. When asked about how Pant would convince Phelps to play cricket, the young Indian said, I would just tell him that he is most welcome to stay at my place for as long as he wants, where I can teach him how to play the sport. The 33-year-old American replied with, That sounds good to me, and it means that I am coach-able which makes me happy.

Morris, who joined up with the squad late Monday evening, said, Like I said the man is an absolute legend. He is the all-time leading Gold Medal winner at the Olympics. It is quite an honour for us to interact with him and I am very excited to see him today. Michael Phelps is a name that is synonymous with Olympics, and there are two Olympians who have become household names, and it is Phelps and Usain Bolt so I m really buzzing.

India s pace spearhead Ishant Sharma also spoke on meeting the man with 23 Olympic gold medals. It was a great opportunity for all of us to have met him. You know he s a world champion and we shared a few moments with him as well. He has been a huge motivation to athletes around the world over the years, and it was the same for all of us at the Delhi Capitals today, said Ishant Sharma. 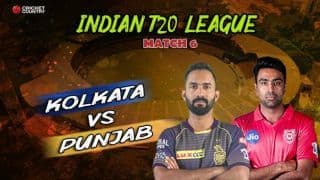