The short international career does no justice to his glittering feats in domestic cricket, where he served Mumbai with great success.

Paras Mhambrey, born on June 20, 1972, played two Tests and three One-Day Internationals (ODIs) for India in the 1990s. The short international career does no justice to his glittering feats in domestic cricket, where he served Mumbai with great success. In 91 First-Class matches, he took 284 wickets at an impressive average of 24.36. Not only that, but he was also a competent batsman, with an average touching 20. Nishad Pai Vaidya picks 11 facts one must know about the Mumbai stalwart.

Mhambrey grew up in Mumbai and had his fair share of galli cricket as a young boy. In his formative years, he did not take cricket seriously and it was only after he passed the 10th grade that he decided to join a proper cricket camp. Even then, he only wanted to play the sport and did not have huge ambitions.

Ramakant Achrekar’s academy in Shivaji Park is famous for producing some fine cricketers, who have gone on to represent Mumbai and India. Of the lot, Sachin Tendulkar is the biggest name. VinodKambli and PravinAmre also learnt their cricket under the watchful eyes of Achrekar. Mhambrey too started off under the tutelage of Achrekar.

In the early 1990s, the Bombay Cricket Association (BCA) and Mafatlal organised a camp for bowlers in Mumbai. Frank Tyson, the former England bowler, was at the helm and mentored numerous young prospects during that camp. Mhambreyonce told me, “It [the camp]was a turning point in my career when I came under Tyson’s tutelage. I started understanding the basics and dynamics of cricket. Fitness wasn’t a culture in the Mumbai them. After that camp, we started focusing on that area.”

Mhambrey made his debut for Mumbai during the 1993-94 season. That year is remembered for Ravi Shastri’s captaincy, which took a young Mumbai team to the Ranji title. Mhambrey was one of the star performers, with 30 wickets at an average of 23.73 in eight matches. His most memorable spell was five for 35 against arch-rivals Maharashtra, which shot them out for a meagre 75.

5.  India call-up in the midst of an examination

Mhambrey missed the bus for the 1996 World Cup and had been away from cricket for a while to study for his Bachelor of Commerce (B.Com) examinations. He was then selected to tour England and was quite surprised as he had been months away from the game. Not only that, but the rains in Mumbai meant that he could not get proper practice before leaving for England.

Despite being a force in domestic cricket, Mhambrey’s time at the highest level was short. He only played two Tests and three ODIs. Out of those five international games, four came on the tour to England in 1996. Although he picked up a wicket off his second ball in international cricket, he failed to make a mark. Mhambrey struggled through the tour and the lack of preparation had clearly affected him.

About two years after the maiden tour to England, Mhambrey was recalled for an ODI against Bangladesh at the Wankhede Stadium, Mumbai. In that game, he recorded a spell of one for 22 in six overs. That was his final appearance in the India jersey.

Mhambrey has one ton and five fifties in First-Class cricket, which shows that he was a competitive batsman. Incidentally, he began his representative career with a fifty on debut for the Bombay under-19s in 1991. His only First-Class ton came against Maharashtra in 1999. Batting at No. 7, he scored 117 to help Mumbai win the game by an innings.  He finished with a batting average touching 20.

In 2002-03, Mhambrey was the captain of the Mumbai team as they clinched the Ranji title. With that, he decided to call time on his career and look for other avenues.

Mhambrey has coached Maharashtra, Bengal and Vidarbha in Ranji Trophy. Ironically, he was the coach of the Bengal team when they faced Mumbai at the Wankhede Stadium in the 2006-07 Ranjifinal. In 2007, he also coached the India A team against South Africa A. In 2014-15, he was the coach of the Vidarbha team that qualified for the second round of the Ranji Trophy for the first time in nearly 19 years.

Mhambrey had been with the Mumbai Indians (MI) for quite a few seasons as a coach, forming an important part of their backroom staff. 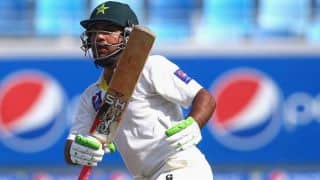