The tournament was played for a span of almost two months and cricketers were away from their families and loved ones.

The ninth edition of Indian Premier League has finally concluded its result with Sunrisers Hyderabad emerging as champions. The tournament was played for a span of almost two months and cricketers were away from their families and loved ones. As the hectic tournament is finally over, everyone has returned back home and are now looking for some break from cricket and spending some quality time with the family. READ MORE: IPL 2016: Most memorable moments, Part I

Ben Cutting, who was awarded the Man of the Match award for his heroics in the ultimate battle has arrived home and his wife Erin Holland is ecstatic about it. She took to her Instagram handle to express her glee as she posted a mesmerizing picture of the two and wrote, “Thank god you’re home.  #2monthstoolong #soproud @Cuttsy31 .” READ MORE: IPL 2016: Notable players who had little or nothing to do in season 9

Cutting played a key role for the Sunrisers Hyderabad in the ultimate decisive battle and saw his side clinching the title for the first time. As of now, Cuttting will look forward to give his family more time as he’s been away from home for a while. 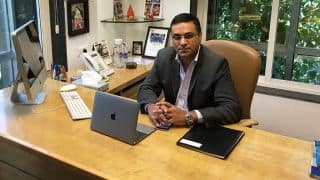