Photo: How David Warner got Virat Kohli to ‘smile big’

Photo: How David Warner got Virat Kohli to ‘smile big’

On field they may be the fiercest of opponents but off it that is not the case. Indian Test skipper Virat Kohli and Australian vice-captain David Warner may not be the best behaved cricketers on field but they share an excellent rapport with fans and are pretty active on social media. Kohli was recently in Australia and had a fantastic run.

In recent times, there were reports of his break-up with long-time girlfriend and Bollywood actress Anushka Sharma but Kohli’s form was top notch. Warner demanded that Kohli should smile more often in the pictures he posts on Instagram and the latter agreed.

David warner @davidwarner31 reckons i should smile in my instagram pictures. Here you go mate. My biggest smile till date. Haha #takingachallenge #goodonyamate

The Indian batsman has been given rest for the current Twenty20 International (T20I) series against Sri Lanka and hope he continues his good form in social media as well. Meanwhile Warner is readying himself for the Test series in New Zealand. 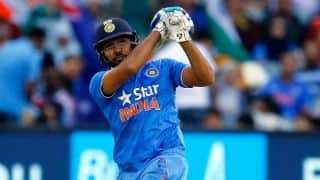