If Alastair Cook continues to play for another half a decade, then Sachin Tendulkar's tally of 15,921 runs, which is a world record, may be under threat.

Alastair Cook relinquished England’s Test captaincy after being in the role for over four years. His full-time tenure began with the India tour in 2012-13, when he led from the front with the bat, helping England register a win in India after close to three decades. England won 2-1 and Cook since then enjoyed mixed results with the pendulum swinging in the extremes of lows and highs. The 0-4 drubbing in India earlier this season will go down as his last assignment at helm.

However, Cook is only 32 and already England’s most successful batsman in Tests. He recently went past the 11,000-run mark in Test cricket and if he continues for another half a decade, then Sachin Tendulkar’s tally of 15,921 runs, which is a world record, may be under threat.

England all-rounder Ian Botham certainly believes that can happen. Cooky is the one player who has any realistic chance of challenging Sachin Tendulkar s run-scoring feats and I wouldn t put it past him to set a global standard for others to chase, cricket.com.au quoted Botham as saying. What do you think?

Cook has played 140 Tests and scored 11,057 runs at 46.45. The fact that he only plays Tests makes his case stronger to surpass the Indian maestro, widely regarded as cricket’s most complete batsman. 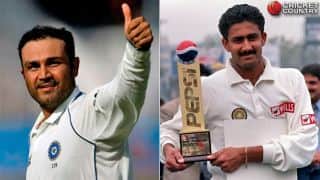