Rameez Raja does it again! Ensures he trends on Twitter for his commentary gems

Rameez Raja does it again! Ensures he trends on Twitter for his commentary gems

Former Pakistan skipper Rameez Raja, who is now a popular commentator (more popular for his gaffes), once again caught the Twitter trends.

It seems that some things just follow a pattern. In the recent times, whenever Virat Kohli has steered India to a win, Twitterati have made it a point to troll Anushka Sharma. Well, Anushka for no fault of hers finds herself trending (not a bad publicity, though!). However, there is one man who is fast catching up with the Bollywood actress here. Former Pakistan skipper Rameez Raja, who is now a popular commentator (more popular for his gaffes), once again caught the Twitter trends.

Why not? His unintended hilarious gems from the commentary box have often made fans roll in laughter. Some of the statements he made on Friday were:

“Middle of the edge”

As a Pakistani, he may be upset as the side were terrible on the field and leaked away easy runs as Australia smashed 193 from their 20 overs, but you can not help Twitterati from trolling Rameez. Once again and not for the last time, we bring you some of the best tweets.

Ramiz Raja most times doesn’t know that there is other team playing as well. Not just one team. #PAKvsAUS @ICC

‘Plays it with the bat’ ~~ Another gem by Ramiz Raja. #AUSvPAK

Get the Ramiz raja out of the Commentary box he is so annoying with his loud voice #PAKvsAUS — navjot brar (@NavjotBrar86) March 25, 2016

The difference between Afzal Guru and Ramiz Raja is same as between Physical torture and Verbal Torture. 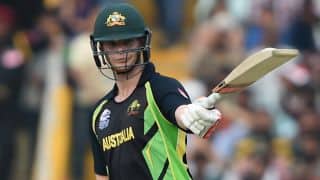