Ravi Shastri and Nasser Hussain: When DRS caused a rift between two commentators

Ravi Shastri and Nasser Hussain: When DRS caused a rift between two commentators

Shastri and Hussain get into a war of words in the commentary box regarding DRS during the India-England match at Trent Bridge in the 2011 series.

Former Indian all-rounder Ravi Shastri and former England skipper Nasser Hussain are both known to speak their minds and make no qualms to hide their disappointment if things don’t go as per their liking. When two such volatile personalities clash, there’s bound to be some serious sparks.

Coming to the incident, India and Decision Review System (DRS) don’t usually go hand in hand. It is evident from the stand of Board of Cricket Control in India (BCCI) with them not accepting the system until and unless it is 100% foolproof.

During India’s tour of England in 2011 in the second test at Trent Bridge, Harbhajan Singh was given lbw off Stuart Broad’s delivery in the first innings. Harbhajan was one of the victims of Broad’s hat-trick that match. The off-spinner was not happy with the decision and rightly so because he had a huge inside edge before the ball hit the pad. On commentary, Hussain quickly pointed out, “Using incomplete DRS is disgraceful by BCCI.” India had opted to only use hotspot and the ball tracking system in the series.

In the studio show of ESPNStar, Harsha Bhogle brought up the topic in front of Sourav Ganguly and Ravi Shastri. And Shastri was quick to dismiss Hussain, “What right does he (Hussain) have to say this, you know?”

Strong words from the former India cricketer initiated the controversy. On the third day when England were batting in the second innings, Hussain and Shastri were in the commentary together along with Bhogle when Hussain picked up on the comments made by Shastri in the studio show.

Hussain responded to the comment as to how he got the right to make a comment in public, “I think I have earned the right after 96 test matches to voice my opinion on the game of cricket and surely that’s what for ESPN have asked me to do.”

Shastri responded, “You said India not taking it as a disgrace and now that’s the case, India has every right to decide whether to take it or not and the reason why India decide not to take it up because they don’t think it’s a hundred percent foolproof. Technology is improving all the time and after seeing the way hot spot has behaved, it has become cold spots. I think India has every right to believe and do what they did.”

There were tense moments in the commentary box and Hussain agreed to Shastri’s point and clarified that it wasn’t about India and if even it was Zimbabwe touring and not using DRS, he would have still said the same. Hussain, then picked on the topic of jealousy and said, “No one is more proud than me about India at top” where Shastri interrupts, “I didn’t say anything about you but when I pick up British press and I see some of the articles that are written, you just get the feeling that they can’t just stomach the fact that India have achieved what they have in spite of all the things said about BCCI, the IPL, they are still number one and they are World champions.”

Hussain agrees to all of it but he insists that he has been paid to voice his opinion and whether it is Zimbabwe or West Indies or Pakistan and adds, “I am a fan of DRS system.” He relates to the Harbhajan dismissal and states that if the technology can remove such howlers, “Why use it for run-outs, why not use for other dismissals as well?” It is not hundred percent but it will remove the howler and that his comment is not about Indian cricket. He repeats again that, “I have the right voice my opinion, after all that is what ESPN pays me for.”

Shastri then goes on the back-foot and says that on the show it was also discussed that DRS can be used to remove howlers like that of Harbhajan’s dismissal. The story just doesn’t end here, later on in the One-Day International (ODI) series, Hussain was again in the news when he commented on the Indian fielders and termed some of them as ‘donkeys’ on the field. He didn’t mean to term the Indians ‘donkey’ but he meant that some of the Indian fielders were slow and needed to buck up with their fielding skills. This created a huge uproar among Indian fans and former cricketers, and Hussain was lambasted by the Indian press.

It was strongly objected by the BCCI and they demanded an apology from the English batsman. He made the comment during the second ODI match which India lost. Former England captain Michael Vaughan too agreed to Hussain’s comments, he tweeted, “Just seen that Nasser said the Indians have a couple of donkeys in the field. How wrong can he be! I have seen at least 4. I was useless in the field. But I would be a superstar at cover point in this Indian team.” A comment which certainly didn’t go well with BCCI and Shastri as well, and many Indian pundits accused Vaughan of cheap publicity, which began with him accusing VVS Laxman using Vaseline gel in bat to avoid getting detected for caught behinds in the Hot-spot.

During the same time, there was a report in the news that Sunil Gavaskar and Shastri are the highest paid commentators in India and are on BCCI payrolls. Their salary was disclosed and it was reported that they earned more than several cricketers in the Indian team. British media accused that all Shastri and Gavaskar did was ‘paid commentary’ – advocating for BCCI’s stands and talk anti-DRS because of the directive from BCCI. Both denied that they are ‘hired puppets’ and that they speak their mind. BCCI doesn’t direct them to speak things on commentary.

(Darshan Chokhani is a Sports Management post graduate. A huge motorsport fan and writer. A follower of cricket, tennis and wrestling. Apart from sports, he is fond of travelling, music, social media and photography. You can engage with him on Twitter @DarshanChokhani) 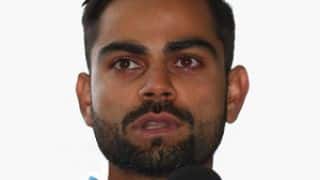