Sachin Tendulkar shared a picture of his with Phil Hughes.

As Australia and the cricketing world bid tearful farewell to Phil Hughes, Indian cricket legend Sachin Tendulkar praised the deceased opener through a post on Twitter.

Will miss you Phil. Your enthusiasm to learn and drive for perfection was most impressive. #FarewellHughes pic.twitter.com/5tpK0asSFg

Tendulkar shared a photograph of his with Hughes, who was a part of the Mumbai Indians’ team in the Indian Premier League 2013.

Hughes had once met his idol’ Tendulkar and had lunch with him. They discussed several technical and mental aspects of the game, and the Australian opener had described the moment as a “dream come true”. He admitted how the interaction helped him develop as a mentally stronger cricketer.

“It [meeting Tendulkar] was a dream come true moment for me. It was a generous gesture on his part to spare couple of hours for me from his busy schedule. It was a great experience,” Hughes said in 2009. 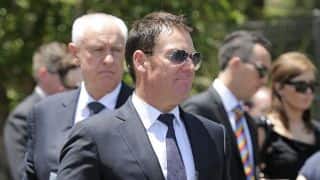 Phillip Hughes: Funeral in the newsroom