It was earlier reported that Anushka Sharma's brother was helping Virat Kohli to win back the actress and if a report in BollywoodLife is to be believed, Anushka's Sultan co-star Salman Khan too played a role in getting the lovebirds back.

A few years back, Virat Kohli met Bollywood beauty Anushka Sharma during a shoot of shampoo ad and they hit it off instantly. Soon began a relationship that media loved to cover. Both the young celebrities had a steep rise to their respective careers and they became tabloid darlings.

Many a times, Anushka was seen cheering Kohli during cricket matches and often she became a subject of internet trolls when the Indian cricketer failed to perform to expectations. Earlier this year, the couple made a lot of news with their reported ‘break-up’ and then again ‘patch-up’. ALSO READ: Virat Kohli, Anushka Sharma tricked media at Sultan screening?

It was earlier reported that Anushka’s brother was helping Kohli to win back the actress and if a report in BollywoodLife is to be believed, Anushka’s co-star in Sultan, Bollywood superstar Salman Khan too played a role in getting the lovebirds back.

A source was quoted as saying, “He (Salman) was often heard jokingly saying things to her like ‘pyaarekbaarhotahai, if you have true love then keep it’.” READ MORE: Anushka Sharma’s brother helping Virat Kohli win back his lady love

He might be one of India’s most controversial characters, but Bhai, as Salman is affectionately referred to, is also known for his kind heart and charitable nature. Looks like he is living up to it. 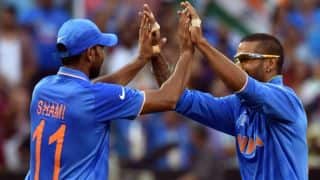