Dhoni is seasoned at winning ICC tournaments. He has been able to get the best out of his team to mastermind a sensational turnaround after being winless in the recent Test series Down Under, followed by a disastrous outing in the tri-series.

Tulika Bhattacharya lists down six reasons why India will beat  Australia in their own backyard in the ICC World Cup 2015 semi-final at the Sydney Cricket Ground (SCG) on Thursday.

Cool as a cucumber, shrewd as a fox and hands-on like a true leader, MS Dhoni is a boon to Indian cricket; facts and figures unambiguously vouch for that: 100 One-Day International (ODI) wins as a captain and leading India to three International Cricket Council (ICC) Trophies, World Twenty20, ICC Champions Trophy and World Cup in 2011, the first captain in cricket history to achieve the feat.

Dhoni is seasoned at winning ICC tournaments. He has been able to get the best out of his team to mastermind a sensational turnaround after being winless in the recent Test series Down Under, followed by a disastrous outing in the tri-series. Dhoni’s cool head in what will be unquestionably a tense, high-intensity semis at the SCG will be a big factor in India’s favour.

India have amassed 300-plus scores every time they have batted first, thanks largely to Virat Kohli’s 107 in India’s inaugural match against Pakistan, 137 and 100 by Shikhar Dhawan against South Africa and Ireland respectively, Suresh Raina’s 110 against Zimbabwe and Rohit Sharma’s 137 against Bangladesh in the quarter-finals. Ajinkya Rahane and Dhoni, too, have been among the runs, which means the entire middle-order is in very good nick and bubbling with confidence.

It is well known that the SCG is a spin-friendly track. In Ravichandran Ashwin India have one of the best spinners in contemporary cricket. Ashwin has made an impact in the 2015 World Cup and will pose the biggest bowling threat to the Aussies. Ravindra Jadeja will bowl in tandem with Ashwin to sustain the pressure on the Aussies from the other end as well. It will not be surprising if Suresh Raina bowls 10 overs tomorrow as he is more than handy with his off-spin.

Glenn Maxwell, the Australian spin option, has five wickets in the tournament, compared to the 12 and nine wickets by Ashwin and Jadeja respectively. While Australia boasts of a fine line-up of pace bowlers, they would miss the services of someone like Nathan Lyon against India.

The Indian bowlers were written off by one and all after their form and performance heading into the World Cup. But the performance of the troika of Mohammad Shami, Umesh Yadav and Mohit Sharma has been jaw-dropping. Shami is one of the leading wicket-takers in the 2015 World Cup, while Yadav and Mohit have provided him with ample support and along with the spinners. Thanks mainly to the fast bowling trio, India has dismissed the opposition in all seven matches so far.

Virat Kohli has fond memories of the SCG. In January this year, captaining India after the shock retirement of skipper Mahendra Singh Dhoni from Tests, Kohli smashed 147 in the first innings and later 46 to lead India to a respectable draw. It was his fourth century in the Border- Gavaskar series that thwarted Australia from making it 3-0 in the series. Kohli is arguably the finest batsman in contemporary one-day cricket and he presents the biggest batting threat to Australia. Bigger the occasion, greater the intensity of this angry young man of Indian cricket. And with his sweet-heart Anushka Sharma coming all the way from India to cheer him and Team India, Kohli would be pumped up to succeed on the big stage.

Though the Aussies will not admit it openly, there are enough indications that the massive and raucous Indian presence inside the SCG will be a factor to contend with for the Australians. And should Australia lose a few quick wickets and find themselves under early pressure, the decibel of the crowd could test the nerves of the Aussies big time. Make no mistakes; the Indian supporters will make a huge difference to the contest. 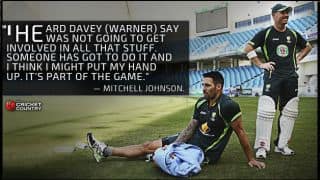