In this video, Ganguly can be seen enacting Ranveer’s dialogue from the upcoming flick Bajirao Mastani.

Former Indian captain Sourav Ganguly took the world cricket by storm when he made his debut at the home of cricket, the Lord’s ground, 19 years ago and slammed a hundred. The legendary batsman has made yet another smashing debut, this time on a different pitch though.

Ganguly recently made his Dubsmash debut with Bollywood actor Ranveer Singh, who is busy promoting his upcoming movie Bajirao Mastani quite extensively these days. ‘Dada’, who is a shy man off the field, did pretty well on his first attempt at the lyp-sync act.

In the video, Ganguly can be seen enacting Ranveer’s dialogue from the upcoming flick Bajirao Mastani, which is scheduled for a December 18 release. It seems that his performance manages to impress the actor, whose expressions suggest a thumbs up from his side! Watch the video here: 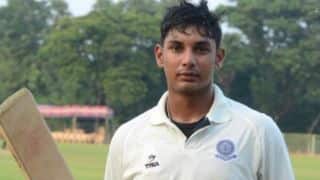 Ricky Bhui to lead India Under-19 in Tri-Series 2015 vs Sri Lanka, England