This is the first time the island nation beat the mighty Australians is all the Tests of a particular series.

Sri Lanka whitewashed the Australians, the top-ranked Test team in the world before this loss, after winning the Colombo Test by 163 runs and thus completing a historic 3-0 win. This is the first time the island nation beat the mighty Australians is all the Tests of a particular series. Also with this loss, Australia continued to fare poorly in Asia, as it was their 13th loss in last 18 Tests in the Indian subcontinent. ALSO READ: Watch Kusal Mendis take a stunning catch to dismiss Shaun Marsh.

Rangana Herath, Dhananjaya de Silva, Kaushal Silva and Dinesh Chandimal were the chief architects of their win. While the former took 13 wickets in the game, the latter three struck vital hundreds in the match. This win changed the face of ICC Test rankings as India became the new No.1 Test side followed by Pakistan.

While the Lankans will rejoice and celebrate the win, the Australians will be left with a lot to ponder upon. The result attracted a lot of reactions from the Twitter space. Here’s who said what on the Sri Lankan win:

Whitewash over the No 1 Test team, one of the greatest Test series wins. proud of the boys, Congratulations #SLvAUS

What a win. Well done Fordie @Angelo69Mathews @sanath07 greatest achievement in our test history. So very proud of the team Young but strong

If @HerathRSL was English he would be knighted. I am so glad he is Sri Lankan. He deserves the highest credit and recognition. Great man

Huge win from Sri Lanka!! Great series from all involved! Another torrid time for Australia in the subcontinent! #spin #SLvAUS

As much as it’s about SL’s dominance in this series, it’s equally about Australia’s inadequacies vs spin. Former #1 were pedestrian!

Out of 60 Australian wickets that fell in the series, 54 were taken by the spinners- that’s the most in a three-match series ever !#SLvAUS

Cheers to all the cricket fans who support our team now and even at the times we got whitewashed. a href=”https://twitter.com/hashtag/SLvAUS?src=hash”>#SLvAUS

It was in 2004 when Ricky Ponting’s team came and whitewashed us 3-0. And finally after 12 years we’ve returned the favor! #SLvAUS

Really happy for the #SLC #SriLankaCricket team. Next up: Beat them on their own soil.@OfficialSLC #AUSvSL #SL #SriLanka #LK #LKa

Australia are 0-5 in Asia, now it’s upto India to make 0-9. Good effort from the Asian continent to take India’s 0-8 revenge. 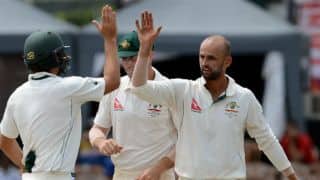 India displace Australia as No. 1 team in ICC Test rankings