Former Australian fast bowler Merv Hughes feels that Phil Hughes’ unfortunate death should not make the fast bowlers wary of bowling the bouncers and wants the first India-Australia Test to start with a bouncer.

After Phil’s death, New Zealand fast bowlers did not bowl any bouncers during their win over Pakistan in United Arab Emirates (UAE).

Merv said that what happened to Phil was a rare incident and one should ‘get on with business’ and play competitive cricket.

“I reckon just to clear the air the first ball of the game…should just be a bouncer, and just say ‘right, let’s get on with business’.

It might be a callous, uncaring way to look at it but what we’ve got to take in mind is what happened to Phil Hughes is a tragic accident.

There’s been bouncers bowled over 100 years of cricket and this was an isolated incident. As Michael Clarke said in his speech [on Wednesday], we must play on,” said the bowler who took 212 wickets in 53 Tests for Australia.

Shami starts with a bouncer

Indian fast bowler Mohammed Shami, however wasted no time in the opening day of his team’s practice match against Cricket Australia XI at Glenelg on Thursday, as he sent down a bouncer at batsman Jordan Silk in his very first over.

Later, Silk expressed his surprise to the TV reporters when he said, “(I was) a little bit shaken up but I just stayed composed and if anything it probably got me going a bit better.” 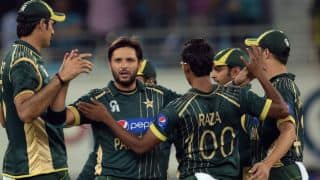