Taufeeq Umar, born June 20, 1981, is a Pakistani opening batsman who was an integral part of the side in the 2000s. On his 34th birthday, Shiamak Unwalla looks at 10 interesting facts about the man who was perhaps treated a bit shabbily by the Pakistan selectors.

Taufeeq was in the scheme of things from an early age. After attending a coaching camp at the age of 13, he was a part of Pakistan’s side that played the under-15 World Cup in 1996. Pakistan reached the final, where they lost to India. Incidentally, that young Pakistan side contained a number of future international players such as HasanRaza, Bazid Khan, Faisal Iqbal, Kamran Akmal, Yasir Arafat,Shoaib Malik andTaufeeq himself.

Taufeeq had a memorable Test debut, scoring 104 off 163 balls against Bangladesh in 2001. Five of the top six batsmen scored tons for Pakistan, as Bangladesh lost by an innings.

When one thinks of great Pakistani openers, names like Hanif Mohammad, Majid Khan, Sadiq Mohammad, MudassarNazar, Saeed Anwar andAamerSohail come to mind. But not many realise that Taufeeq is third on the all-time list of runs scored by Pakistan openers, behind Anwar and Mudassar.

Though Taufeeq was known predominantly for his batting, he was a decent part-time off-spinner as well. He bowled a bit in international cricket, but was called upon quite often in First-Class and List A cricket. He even has a List A fifer. In addition to his bowling, Taufeeq was also capable of keeping wickets. He never played as a frontline ‘keeper, but he stepped in on occasions; most notably part-time ‘keeping instances against Australia at Sharjah in 2002-03. Pakistan’s regular wicketkeeper Rashid Latif was injured, so Taufeeq kept wickets in both innings, taking two catches as ‘keeper in the match. Sadly for Pakistan, they were bowled out for 59 and 53 as Australia crushed them by an innings.

A lot of cricketers have one opposition they favour more than others. For Taufeeq, that opposition was South Africa. In six Tests against them, he scored 730 runs at 60.83 with two tons and four fifties. In ODIs, Taufeeq favoured another African nation: Zimbabwe. In the six ODIs he played against them, he scored 260 runs — over half of his ODI aggregate! He averaged 52 and scored all three of his ODI half-centuriesagainst them.

The crowning glory of Taufeeq’s batting career came against Sri Lanka in Abu Dhabi in 2011. In the first Test of the series, Taufeeq batted for 712 minutes to score a remarkable 236. In doing so, he became the first Pakistani opener to reach the landmark since Aamer Sohail scored 205 against England in 1992.

Taufeeq played only 22 ODIs for Pakistan, going past 50 only three times (all against Zimbabwe) and by and large doing a lacklustre job in that format. Many felt he was best suited to Test cricket, and should forget about the shorter formats. However, a look at Taufeeq’s T20 record is quite inspiring. In 36 matches he has played so far, Taufeeq has scored 1124 runs at an impressive37.46. He is also one of the few Pakistanis to have scored a T20 ton.

Taufeeq played for the Mumbai Champs and later the Lahore Badshahs in ICL. He had stated that ICL was a challenge he enjoyed due to the different conditions and players from all over the world.

One of the most interesting and unique facts about Taufeeq is that he is perhaps the only man in history to have managed a pair (one duck in each innings) off two balls without it being a King Pair! A King Pair occurs when a batsman is out off his first delivery in both innings of a Test, so his tally usually reads 0 runs scored off 2 balls in the Test. However, in the Sharjah Test of 2002-03 against Australia (the same Test in which he kept wickets as mentioned above), Taufeeq was out for a two-ball duck in the first innings. In the second innings, he was run out for a diamond duck (that is, without facing a delivery).  He was out for 0 runs off 2 balls in the Test, but it was not a King Pair!

Ramakant Desai: 10 interesting facts about the tiny man with a large heart 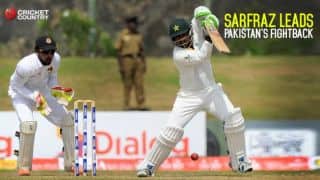