Team India in USA: Dinner, Virat Kohli's interaction with fans and other stuff from Florida

Team India in USA: Dinner, Virat Kohli's interaction with fans and other stuff from Florida

The moment all these Indian cricketers arrived in USA, they spent some quality time together.

Indian cricket team has arrived at Florida, USA to play two-match Twenty20 International (T20I) series against West Indies. Since Indian Test side was playing the Test series in the Caribbean, only two players needed to travel from India in order to play the T20I series.These two cricketers are captain MS Dhoni and pacer Jasprit Bumrah.

The moment all these Indian cricketers arrived in USA, they spent some quality time together. Some went to meet NBA’s basketball team Miami Heat players while some were toiling hard at the nets for practice. ALSO READ: In USA, Dhawan, Ashwin, Bhuvneshwar meet NBA team Miami Heat’s players

Captain Dhoni and Bumrah arrived there yesterday and they were clicked at the airport which was shared by official Twitter account of BCCI.

On the other hand, Virat Kohli was seen interacting with fans at the stadium by giving autographs, whereas captain Dhoni and coach Anil Kumble were seen discussing ahead of the first T20I.

Captain @msdhoni and coach @anilkumble1074 in a discussion ahead of the 1st T20I against #WI #TeamIndiaInUSA pic.twitter.com/38qI2qaEWa

Also, some players were seen practicing and later in the day, there was a team dinner.

Jasprit Bumrah in action during the nets session #TeamIndiaInUSA https://t.co/zKVbcQVin0

#TeamIndia bowlers warming up ahead of their nets session #TeamIndiaInUSA pic.twitter.com/f6GxNmulWw 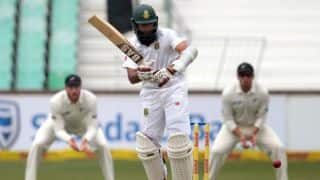